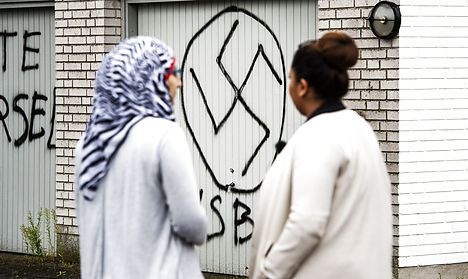 Residents look at the graffiti on the centre's garage. A vehicle was also torched. Photo: Bo Amstrup/Scanpix
East Jutland Police said on Friday that a 26-year-old local man has been arrested and will be held on remand for allegedly setting fire to an asylum centre minibus and vandalizing its garage with a swastika and a message telling the centre that this was its “first warning”.
See also: Danish asylum centre hit with Nazi 'warning'
The early Thursday morning vandalization of the Red Cross’s Lyngbygård asylum centre was the third time in recent months that the centre has been defaced. In all three instances, the initials DNSB, which stand for Danmarks Nationalsocialistiske Bevægelse (the National Socialist Movement of Denmark), were spray-painted on the centre.
According to public broadcaster DR, the man is a known figure in the Danish far-right who has expressed anti-refugee sentiment on Facebook.
The man made an initial court appearance on Friday and will be held on remand for four weeks. The court has barred the public release of the man's name.
On Thursday, police said that they suspected the same person was behind all three incidents, but in a short press release following the 26-year-old’s arrest, they did not indicate if he is also being investigated for the March and July graffiti.
Anders Ladekarl, the general secretary of the Danish Red Cross, blasted the perpetrator of the vandalism but stressed that Danes are generally welcoming of asylum seekers.
“Nazi idiots have [Wednesday] night written threats against asylum seekers and burnt a vehicle at our asylum centre at Lyngbygård near Grenå. Luckily, this is an isolated event and no other places in the country have experienced anything like this in many years,” Ladekarl wrote on Facebook.
The Red Cross has started a collection to raise funds to replace the destroyed minibus, which is used to transport the centre’s roughly 120 residents.