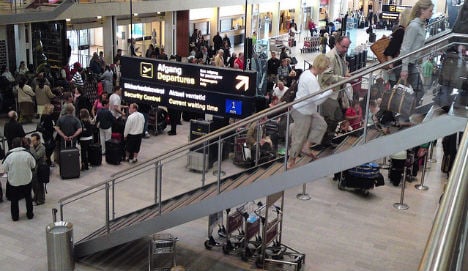 The check-in area at Copenhagen airport in Kastrup. Photo: Karl Bacon/Twitter
The youth, who is of Middle Eastern descent, remains in Danish custody more than two weeks after making his ill-advised gag as he was checking in his bag on August 12.
According to Denmark's TV2 channel, the boy's bag was emitting loud beeps as he handed it to the female airline employee.
“I am sorry I have to do this to you,” he said in thickly accented English.
The employee's anti-terror training kicked in, and she triggered an alarm. The police arrived minutes later to arrest the youth.
As it happened, there was no bomb in the bag, and when he appeared in a magistrates court two days later, the youth explained that his friend had filmed the whole encounter.
They had hoped to make some money by posting the video on YouTube.
Judging by the youth's fairly draconian sentence, the Danish authorities failed to see the funny side.