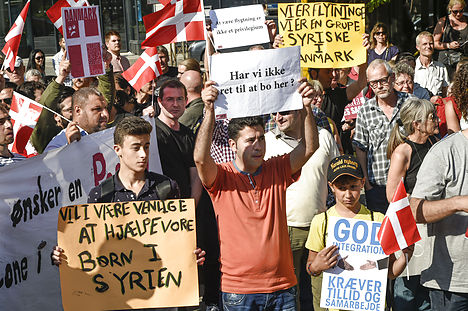 A demonstration against the government's asylum policies was held in Aarhus on Sunday. Photo: Kim Haugaard/Scanpix
Newly-released figures from the Danish Immigration Service (Udlændingestyrelsen – DIS) revealed that 1,038 people sought asylum in Denmark in July. That figure represents a significant decrease from July 2014, when 1,733 asylum seekers came to Denmark.
Through the first seven months of 2015, a total of 5,174 people have sought asylum in Denmark compared to 5,595 over the same period last year. However, August and September of 2014 were by far the biggest single months in terms of asylum numbers, with 2,302 and 3,147 respectively. According to a report in Berlingske newspaper, August 2015 is expected to end with over 1,500 asylum seekers and DIS has previously estimated that 2015 is likely to end as another record year.
The current Venstre government has announced plans to drastically cut the benefits that refugees are entitled to, arguing that the cuts will make it ‘less attractive’ to come to Denmark. The government also plans to run advertisements in foreign newspapers publicising these cuts and has said it wants to base its acceptance of UN quota refugees on their ability to integrate.
See also: Danes publish pro-refugee advertisement
The benefit reductions come after the previous Social Democrat-led government introduced a new, temporary type of residence permit for asylum seekers fleeing civil wars such as the Syrian conflict following the September 2014 peak in asylum numbers. The previous government also implemented new restrictions on the ability of refugees to have their family members join them in Denmark.
See also: Denmark to limit family reunification for refugees
The anti-immigration Danish People’s Party said that despite July’s fall in asylum numbers, there are still too many people coming to Denmark.
“The only positive thing one can say is that the numbers for July are lower than the same month last year and that the amount is generally being held down in relation to the massive influx that Europe is experiencing. But you can’t use that to explain away the fact that there are still too many coming to Denmark,” party spokesman Martin Henriksen told Berlingske.
Syrians continue to represent the largest group of asylum seekers. With the 479 Syrians who came to Denmark in July, 2,142 have sought Danish asylum thus far in 2015. In 2014, that number was 7,087.
The Syrians are fleeing a brutal civil war that has been raging for over four years and has killed as many as 300,000 and displaced an estimated 10.9 million Syrians, or almost half of the country’s population.