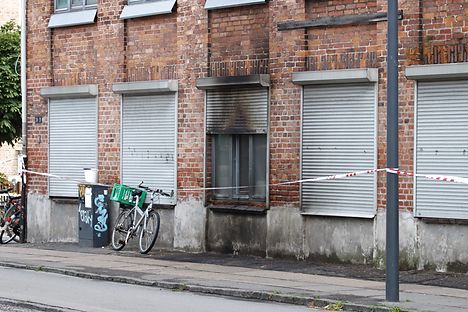 The building only suffered superficial damage during the attack. Photo: Mathias Øgendal/Scanpix

The Danish Facebook group ‘No to mosques – sincerely’ (Nej til moskéer – oprigtigt) was closed down by Facebook on Tuesday, and a man affiliated with the group has since been arrested on charges of inciting crime.

Shortly after the recent arson attack on an Islamic centre, many of the group’s fans posted comments on the page that “glorified” the act, according to the social media site.

“An arson attack against a mosque is a despicable crime, and comments glorifying it do not belong on Facebook,” the company’s regional director for public policy, Thomas Myrup Kristensen, told TV2.

Besides reporting the comments to Facebook, a number of people also took screenshots of them before the page was shut down.

“I’m happy to donate a can of gasoline,” wrote one commenter.

“Good. Respect. Burn down that camel shit,” wrote another commenter, who has since been charged by the police for inciting crime.

The man was also interviewed by Radio24syv, where he told the station that he intended to “go to Poland and pick up my Kalashnikov and shoot all the Muslims.”

The people behind the group have also been reported to the police.

The group was already back on Facebook on Wednesday however, writing in a post that “We welcome you back after a minor bump on the road towards a Fatherland free of mosques and Islam.”

Another Facebook group is currently organizing a so-called “peace ring” event, inviting people to an event on Saturday to join hands and form a circle around the Copenhagen mosque located on Dorotheavej in what is intended to be a call for unity.

“I was very affected by all the hateful comments I read on Facebook following the arson attack,” Rosa Naghizadeh, one of the organizers, told Politiken.

1,100 people have already confirmed that they will attend the event, which is set to take place on Saturday August 22.

Shortly after the arson attack on Sunday, a 34-year old man voluntarily turned himself into custody. The man, who suffers from schizophrenia, is reported to be from the same Nordvest district as the Islamic Society’s complex.

He is expected to appear in court once his mental state allows it. Although he willingly turned himself in, prosecutors said that he turned violent while in the psychiatric unit and is now being held against his will.

The suspect attempted to set fire to a building belonging to the Islamic Society at a time when some 40 people, including children, were inside. The complex also includes a mosque where society members worship.

Since February, when Omar El-Hussein, a young Dane of Palestinian origin, shot dead a filmmaker and an unarmed Jewish security guard outside a synagogue, Denmark's Muslim community has feared being viewed with suspicion.

Those concerns were amplified after more than 50 graves were destroyed at the Muslim cemetery in the Copenhagen suburb of Brøndby in June.

Out of Denmark's population of 5.7 million, nine percent are foreign-born, of whom some 296,000 originate from “non-Western” countries, official statistics show.