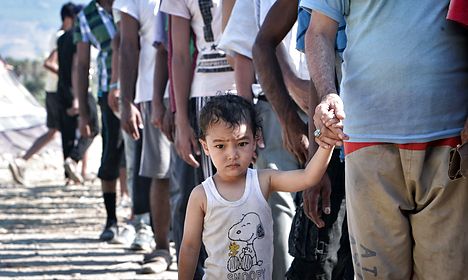 Migrants queue during a food distribution on the Greek island of Kos. Photo: Louisa Gouliamaki
Denmark wants to put more emphasis on ‘the ability to integrate’ into its acceptance of roughly 500 annual UNHCR quota refugees, Integration Minister Inger Støjberg told Jyllands-Posten.
“It is completely crazy not to take those refugees who have the best chances of fitting in in Denmark. There should be more consideration of the qualifications in regards to whether they can learn the language, take an education and get a job,” Støjberg said.
“You do these people a disservice if they get sent to a country where they can’t fit in. It is of course also good for Denmark if the quota refugees we receive also come to contribute,” she added.
See also: UN: Refugee benefit cuts violate convention
Støjberg also said that “some nationalities have an easier path to settling down in Denmark than others” and pointed to integration problems with Somalis.
Denmark is one of 28 countries worldwide that participates in the UNHCR Resettlement Program, and currently receives the fifth highest number of resettled refugees in Europe. According to the UNHCR, less than one percent “of the 14.4 million refugees of concern to UNHCR around the world” are submitted for resettlement through the programme.
According to the Danish Immigration Service (Udlændingestyrelsen), Denmark already considers such factors as “such factors as language skills, educational background, work experience, familial situation, network, age, and motivation” but does not consider those factors in “urgent cases”.
Støjberg’s suggestion to focus more on refugees’ ability to integrate was roundly criticized by parties on the left.
“It goes against the whole thought behind the refugee quota system if one looks at who can contribute the most to the Danish bottom line rather than who needs the most protection,” Red-Green Alliance (Enhedslisten) spokeswoman Johanne Schmidt-Nielsen told Jyllands-Posten.
Zenia Stampe of the Social Liberals (Radikale) went even further with her criticism.
“Does Inger Støjberg think that refugee camps are some sort of job centre where the rich countries can come and hand-pick the smartest individuals? Sort of like the old days in which slaves were set up in a row so that potential buyers could weigh and measure those they wished to import?” Stampe wrote on Facebook.
The Danish Refugee Council (Dansk Flygtningehjælp) encouraged the government to remain flexible in its acceptance of quota refugees.
“It’s good to want to give those who come here a good existence. But it is in principle worrying that you risk leaving a group behind in the camps who no one will protect,” the council’s general secretary, Anders Kamm, told Jyllands-Posten.
A 2013 film about UNHCR resettlement refugees from the Danish Immigration Service can be seen here: