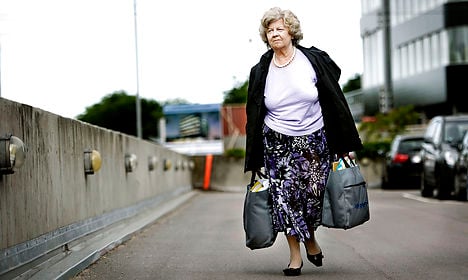 The stateless scandal cost Birthe Rønn Hornbech her job as immigration minister, but the nine-volume report did not hold her personally responsible. Photo: Liselotte Sabroe/Scanpix
Between the period of 1991 to 2010, Denmark wrongfully denied citizenship to stateless residents in violation of their rights and the nation’s international obligations, the so-called Stateless Commission said on Monday.
The commission concluded that the denial of citizenship to stateless applicants – primarily stateless Palestinians born in Denmark – went against UN conventions on the rights of stateless individuals.
According to the commission, the denials that occurred through 2007 were the result of “negligence” for which no one will be held personally responsible. However, the wrongful denial of citizenship to 36 stateless individuals between 2008 and 2010 was pinned on two civil servants in the Immigration Ministry. The officials were immediately relieved of their duties on Monday and may face further repercussions.
“The commission has uncovered that in the period from 1991 to 2010 there were a long line of mistakes made in handling the applications for stateless individuals born in Denmark,” Justice Minister Søren Pind said in a statement.
With the commission’s conclusions, former Immigration Minister Birthe Rønn Hornbech escaped personal responsible for the mistakes made under her command. Hornbech was forced to resign as minister in 2011 after it was revealed that her ministry continued to deny citizenship to stateless applicants despite learning in 2008 that Denmark was not living up to its international obligations as laid out in the 1961 UN Convention on Statelessness and the 1989 UN Convention on the Rights of the Child.
The commission said that even though Hornbech was required to inform parliament that stateless residents born in Denmark were not being included in the annual citizenship bills as they should have been, she was not given “sufficient advice” by the ombudsmen.
“The commission did not take a position on the question of ministerial responsibility, since it is parliament that has authority to raise those kinds of cases. But in my opinion, there is no foundation in the report for holding Birthe Rønn Hornbech responsible,” Pind said.
The nine-volume report released on Monday was the result of a four-year investigation that saw the commission pour through more than 60,000 documents and question some 50 witnesses.