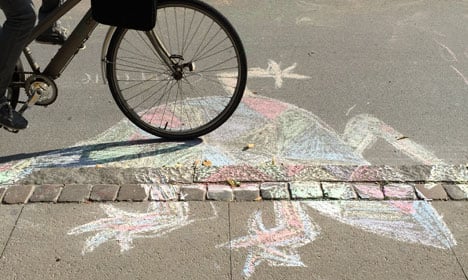 There are certainly worse ways to spend a Sunday than writing – or should we say drawing – yourself in to the record books.
That’s what around 25,000 people must have thought in Copenhagen’s Nørrebro district when they participated in what has officially been declared the world’s largest chalk drawing.
Nearly 19,000 square metres of Nørrebrogade were covered in chalk of all colours in a successful attempt to set a Guinness World Record.
“With 18,598 square metres, Nørrebro has the official Guinness record for the world’s largest chalk painting […] Nørrebro at its finest!” organizer Sigurd Hartkorn Plaetner said when the record was confirmed according to Politiken.
Artists of all ages had ten hours to ply their work on a closed-off Nørrebrogade in the record attempt.
Here is a look at some of the drawings that helped set the world record: