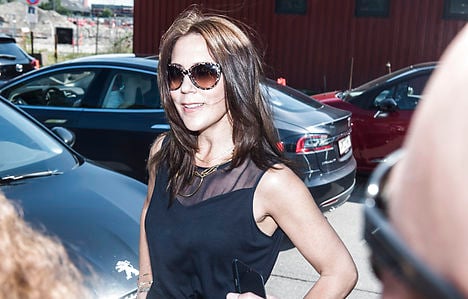 The stylish Crown Princess Mary at Copenhagen Fashion Week. Photo: Simon Læssøe/Scanpix
Hello! asked its readers to vote on ten royal women, including Crown Princess Mary of Denmark, Kate Middleton the Duchess of Cambridge, Crown Princess Mette-Marit of Norway, Queen Maxima of the Netherlands, and Queen Rania of Jordan.
Nearly 29 percent of the readers voted for Mary as the best dressed, putting her on the top of the list, above Queen Maxima of the Netherlands. Mary truly outclassed her Scandinavian rivals, as Norway’s Crown Princess Mette-Marit took dead last and Sweden’s Crown Princess Victoria of Sweden was voted the second worst-dressed.
Princess Mary, the Australian born wife of Crown Prince Frederik, also topped the Hello! poll last year.
But not everything has been coming up roses for Mary when it comes to her style sense. Danish royal watchers were up in arms last week when the Danish crown princess failed to make Vanity Fair’s best-dressed list.
“I don’t understand why she’s not on the list. We have an incredibly beautiful crown princess, whom I clearly feel is among the world’s best dressed,” fashion designer David Andersen told tabloid BT.
Back in February, Crown Princess Mary was voted the Danes’ ‘most admired’ woman.