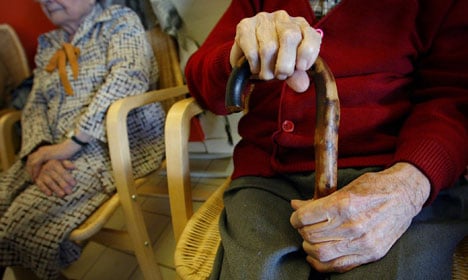 Supporters of the new home say that elderly LGBT people often feel the need to go 'back in the closet'. Photo: Colourbox
The elderly care home Slottet in Copenhagen’s Nørrebro district this week became Denmark’s first home for elderly homosexuals, bisexuals and transgendered, as the rest of the city celebrated gay rights under Copenhagen Pride.
Plans for the home were first announced in November, with the intention of turning Slottet into a place where elderly LGBT (lesbian, gay, bisexual, and transgender) residents can live out their golden years without having to hide their true identity.
“We know that older LGBT people often go 'back in the closet’ when they come to a nursing home. People have lived different lives – some were completely open, while others were more careful. But generally, people of that age lived in a time when it was much harder to be open about one’s sexual orientation or gender identity if it deviated from the norm,” Vivi Jelstrup, a member of LGBT Denmark’s seniors committee, told Berlingske.
“Many feel that it is easier to not open up [about themselves in a care home] than to once again fight for acceptance. That means that you don’t have the same opportunity to be yourself with others and that can make you lonely. That is precisely why we need a place where LGBT people can talk openly about the lives they have led,” she added.
Helge Madsen, 83, was already living at Slottet before it adopted its LGBT profile. He told TV2 that it took him four full years to tell the care home’s staff that he was homosexual. He said he looks forward to life under the home’s new profile and with his new fellow LGBT residents.
“I think it will mean more secure conditions and safer conditions to be with some of my equals,” he said.
Copenhagen’s deputy mayor for health affairs, Ninna Thomsen, participated in the official opening of Slottet on Wednesday. She said that the new LGBT care home is part of the city’s wider ambitions to make all residents feel welcome.
“It is important that the elderly aren’t nervous about displaying their sexuality or gender identity and I think this new rainbow profile will help support them with that. We must remember that this is a generation that really had to fight to be accepted,” Thomsen told Out & About.
Although Slottet has formally adopted its new LGBT profile, it is still open to residents of all sexual orientations.