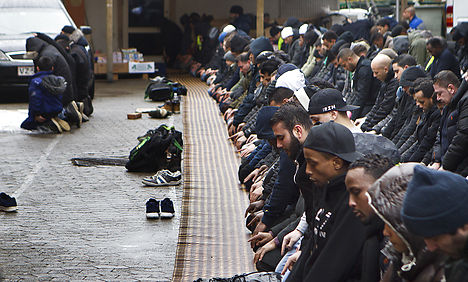 A leading terror expert said the large turnout at a memorial service for Omar El-Hussein spoke volumes about the polarization in Danish society. Photo: Nils Meilvang/Scanpix
A 13-member expert group fronted by Magnus Ranstorp, a terrorism expert at the Swedish National Defence College, presented a plan this week to combat increasing radicalization in Copenhagen.
The group presented 15 recommendations, including better cooperation between authorities, more coordinated prevention efforts and increased community dialogue in radicalized environments.
The plan comes six months after the Danish capital was rocked by twin shootings on February 14-15, in which Omar El-Hussein, a 22-year-old Danish-born man of Palestinian origin who is believed to have been radicalized in prison, shot and killed two men. In the course of those six months, the City of Copenhagen has received 49 concerned reports about potentially radicalized residents compared to 60 in all of 2014.
See also: Copenhagen attacks: terror into the night
Ranstorp told The Local that he was contacted by Copenhagen Mayor Frank Jensen back in November 2014 – three months before the El-Hussein attack – to head up the expert group, which also featured representatives from Danish Security and Intelligence Service (PET), Copenhagen Police and researchers into militant and extremist groups.
“This is one of the first concrete action plans in Europe, and the first in the Nordic countries. We really had a focus on three areas: making a more efficient structure for communication between authorities, building and improving relationships between residents and authorities, and coming up with a series of specific evidence-based measures and approaches,” he said.
Among the key recommendations is better sharing of information across different agencies, an area that has come under scrutiny since the February shootings when it was revealed that warnings about El-Hussein from the Danish Prison and Probation Service (Kriminalforsorgen) were not heeded by PET. The City of Copenhagen was also not informed about the concerns about El-Hussein once he was released.
See also: PET knew gunman was 'at risk of radicalization'
Ranstorp said that while communication between these agencies will be streamlined, another key element is to prevent radicalization before it takes hold. To that end, his group has recommended more community outreach within the radical Islam environment.
Key to that will be utilizing “former radicals who have now seen the light” and sending them in to areas like Copenhagen’s Mjølnerparken housing estate. That neighbourhood was home to El-Hussein and is also where 86 percent of residents have an immigrant background and 46 percent have no job — in a country where unemployment is among the lowest in the European Union.
See also: Copenhagen attacks renew integration debate
“You can’t just sing songs around the campfire. You have to also stick your hand in the fire. There are a lot of people who are really good at reaching troubled youth and we need to utilize them to help establish relationships,” he said.
Ranstorp said he had recently been to Mjølnerparken and was “very impressed” by the efforts to engage the youth there, including job coaching and mentoring.
The Nordic terrorism expert said that the large turnout for the Copenhagen gunman's burial shows that there is a major rift between elements of the Muslim community and greater society.
See also: Copenhagen gunman's burial attracts hundreds
“I was very surprised that there were 700 people who showed up at the funeral of Omar El-Hussein. That says a lot about the polarization and we need to take it seriously. Denmark talks a lot about the 115 to 130 foreign fighters who have gone to fight with Isis but we also have to worry about Isis sympathizers like Omar El-Hussein,” Ranstorp said.
Although Denmark produces Europe’s second largest number of foreign fighters per capita, Ranstorp praised the country’s efforts to combat the problem, which includes a jihadist rehab programme in Aarhus that has garnered significant international attention.
See also: Denmark's jihadist rehab: school, sport and Islam
“Denmark is probably furthest along in the Nordics in terms of local and national anti-radicalization plans. With our new recommendations, we are trying to create a more seamless approach and hopefully prevent a new Omar,” he said.
A summary of Copenhagen's new anti-radicalization strategy can be read here (in Danish).