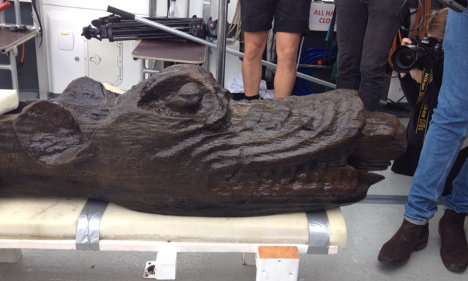 The monster figurehead. Photo: Blekinge Museum
The wooden face, which resembles a monster or a large grinning dog, had been lying on a seabed off the southern Swedish town of Ronneby for more than five centuries.
It is thought to have broken off from the Gribhunden ship, commissioned by King Hans, who ruled Denmark from 1481 to 1513. The ship sunk after a fire.
The creepy figurehead – which weighs 300 kilograms – was discovered by divers in June and was dragged up to the surface on Tuesday. Photo: Blekinge Museum
Marcus Sandekejer from Blekinge museum, which is set to put the discovery on display later this month, told The Local on Wednesday: “This figurehead is probably the only one left from a 15th century ship in the world.”
He said it was a “fantastic feeling” watching expert archaeologists lift the creature out of the water.
“520 years under water….and in such a great condition!”
The museum is now on a mission to preserve the wooden animal as best as possible.
It will spend the next three months in a bath of sugar water, designed to remove the salt it has absorbed from the sea, by osmosis.
“After that, we will look at other ways of keeping it well maintained for the longer term. We have been working with top archaeologists who have worked with other big preservations such as the Kronan ship in Kalmar,” said Sandekejer. Photo: Blekinge Museum
Thousands of people turned out to watch the monster-like mass being hauled from the waters of Ronneby archipelago on Tuesday and Sandekejer told The Local he hoped that the unusual find would encourage more Swedes and tourists to engage with the region's history.
“The more graphic an object is the easier it is to use it to explain the part of history where it is from,” he said.
“It's hard to say 'well this is a stone axe' and get people interested. But this is some kind of monster and everybody is a bit intrigued and just thinking 'what is that?'. For us at the museum an axe would have been almost as interesting! But for others a monster is…more accessible, yes.”
Visitors will be able to see the figurehead inside its water bath at Blekinge Museum from August 30th.
Url copied to clipboard!