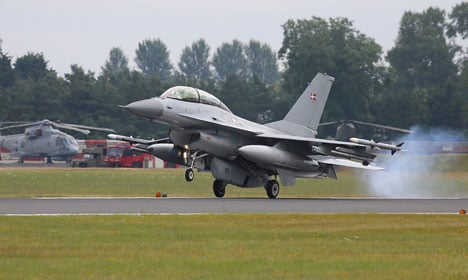 Danish and Swedish aircraft will fly over Moscow on Wednesday. Photo: Ronnie Macdonald/Flickr
The observation flight is part of the so-called 'Treaty on Open Skies'. The 1992 international agreement was signed by 34 states – including the United States and the Russian Federation – to promote military transparency and build bridges after the Cold War.
“This is part of keeping an eye on countries around our borders,” Colonel Carol Paraniak of the Swedish Armed Forces told Swedish Radio's news programme Ekot on Wednesday morning.
Russia's own air force is set to fly over Belgium this week as part of the same international treaty. The country took part in a joint similar flight with Sweden over the United States back in 2009.
“Everything becomes public immediately this way. If it turns out that the Russians have done something that looks really strange you have the opportunity to ask questions through other channels. That is the advantage of this, that it is very much in the public eye as opposed to intelligence operations which are veiled in secrecy,” said Paraniak.
Although the surveillance mission is part of a routine international operation, relations between Russia and the two Scandinavian countries have been notoriously strained this past year, and the Swedish government is behind the country's decision to fly over Moscow on Wednesday.
See also: Russia rehearsed 'takeover' of Denmark
“Russia is always of interest to Sweden and is always going to be. […] The security political situation this particular year has changed a lot compared to last year. Tensions have increased dramatically,” said Paraniak.
The Danish Defence Intelligence Service (Forsvarets Efterretningstjeneste – DDIS) committed much of its 2014 national risk assessment to Russia and warned off “a new frozen European conflict”.
In June, a report for the US-based Center for European Policy Analysis (Cepa) claimed that some 33,000 Russian soldiers rehearsed a military takeover of the Baltic Sea area on March 21st to 25th, including practising the seizure of the Danish island of Bornholm.
That report also detailed Russia’s simulated attack on Bornholm in June 2014, which took place when the island was packed with attendees of the annual political festival Folkemødet.
At the same time the Russians were carrying out their June 2014 military rehearsal, Russia’s ambassador to Denmark, Mikhail Vanin, wrote in an opinion piece published by Jyllands-Posten that Denmark has made itself a target of a potential nuclear attack by joining Nato’s missile defence system.
See also: Russia delivers nuclear threat to Denmark
“I don’t think the Danes fully understand the consequences of what will happen if Denmark joins the American-controlled missile defence. If it happens, Danish war ships will become targets for Russian atomic missiles,” Vanin wrote.
There have also been several incidents of Russian airspace activity over and near Denmark.
In addition to the two Bornholm incidents, a Russian military jet nearly collided with a SAS passenger plane out of Copenhagen in December, while in March of last year a Swedish SAS pilot said his plane was “just seconds” from crashing into a Russian jet.