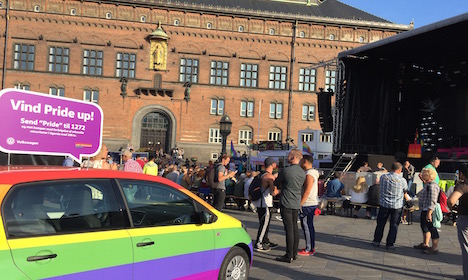 Copenhagen City Hall square became Pride Square on Tuesday. Photo: The Local Denmark/Instagram
Copenhagen Pride 2015 kicked off on Tuesday and will offer a full week of activities in the Danish capital.
Since the first edition of the festival, almost 20 years ago, the festival has been rocking the whole city with music and fun. Back in 1996, the festival wasn't called Copenhagen Pride but rather Mermaid Pride.
More than 21,000 people took part in the 2014 parade while more than 120,000 turned out to watch it roll through the city streets. Organizers expect this year's attendance to be record-breaking again.
“We gather so many people because this is not only a LGBT thing. A lot of inhabitants of Copenhagen support our message of diversity and love,” Thomas Rasmussen, the head of communication for Copenhagen Pride, told The Local.
“This year we keep on growing” stated Rasmussen “We’ll have an extra day and all the program has been improved with bigger names and shows. A new thing about the parade is that there will be a jury of four people rating the performances and handing prizes to contestants, so there will be a little competition”.
“Everybody is welcome and all events are free,” he added. “It's all about having fun.”
During the week, Copenhagen City Hall Square will be converted into Pride Square and will serve as the will be the hub of all activities. Pride Square will be open daily from 12pm to 11pm and will feature an array of free events. 'To Sweden with Love' in Pride Square on Tuesday. Photo: The Local.

“Pride Square as a concept was born more than a decade ago – only then it was named Pride Village and was quite different from what we know today, with debates, a grand stage show and various shops offering food and goods,” according to the Copenhagen Pride website.

Copenhagen Pride, which is completely run by volunteers, has a huge agenda including workshops, conferences, performances, and all kinds of parties. Here, The Local highlights some of the options for having fun at Pride Week, but be sure to check the full programme for plenty more.

On Thursday, Under the Rainbow gives five hours of live performances on the Big Stage of Pride Square starting at 6.30pm. Both Danish and UK performers are included in the lineup.
On Friday, the legendary Drag Night will be headlined by Violet Chachki and hosted by Miss Megan Moore. Drag Night will start at 8pm at the Big Stage, and theme this year is Space Camp. After that, you should drop by the Absolut Pre-Pride Parade Party at Never Mind.
If you’re not ready to party quite so hard on Friday, you can opt for the Proud Walking Tour of Copenhagen (beginning at 4pm on the City Hall steps) or a boat trip via the Pan cAnal tours (no, that's not a typo). Those begin at 4pm, 5.15pm and 6.30pm at Ved Stranden at Højbro Plads.
A special event focusing on LGBT asylum seekers will also be held on Friday, beginning at 6pm at Rainbow Square, the public square adjacent to City Hall that was given a new gay-friendly name in February 2014 to mark Denmark’s historic legacy in promoting gay rights and acceptance.
But as everyone knows, the parade on Saturday and the party after are the real deal. Copenhagen Pride announced a new initiative for this year: all participating vehicles must meet environmental standards. Copenhagen Pride took the decision after a number of complaints from walking participants about having to breathe the thick exhaust of some of the trucks.

The route of the parade will remain the same as previous years. The 3.9 km parade will start at Frederiksberg Town Hall at 1pm and will finish up approximately two hours later at Pride Square (Copenhagen City Hall Square). At the parade's conclusion, the Pride Show will segue in to the Copenhagen Pride Party at Pumpehuset, lasting until the wee hours of Sunday morning.
See a photo gallery from the 2014 Copenhagen Pride Parade
The annual Pride events serve as a reminder that Denmark is one of the most tolerant countries in the world when it comes to LGBT rights. In October 2014, Copenhagen was awarded as ‘the gay-friendliest place on Earth’ by the venerable guide Lonely Planet. The city is also home to Centralhjoernet, Europe’s oldest openly gay bar.
In 1989, Denmark became the first country in the world to recognize same-sex partnerships, although same-sex church marriages weren’t legalized until July 2012. Despite being a forerunner in liberal acceptance, the most recent European Rainbow Map showed that Denmark has still have work to do, particularly in protection of transgendered. Earlier this week, a survey also revealed that 34 percent of Danish workers have experienced derogatory comments about LBGT people in the workplace.