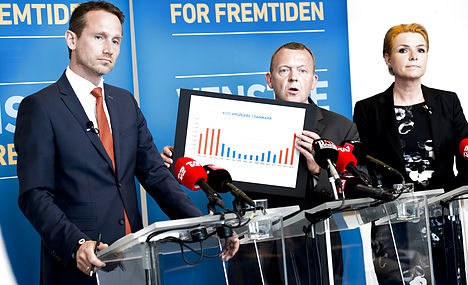 The Venstre government's asylum and refugee policies were criticized by over 30 organizations. Photo: Keld Navntoft/Scanpix
Denmark’s proposed cuts to refugees' welfare benefits will violate the UN’s refugee convention from 1951, the United Nations High Commissioner for Refugees (UNHCR) wrote in a hearing statement to the government.
The UNHCR’s statement was one of 35 submitted in response to the proposed cuts. All but one of them were critical of Denmark’s plans, including a letter from the Danish Red Cross that its general secretary said was the most negative hearing statement he's ever written.
See the assembled hearing statements here (the UNHCR's begins on page 163)
The UNHCR said that the Danish government’s plans to limit the right to the welfare benefit known as kontanthjælp and the student stipend SU to residents who have lived in Denmark for seven of the past right years amounts to a convention violation.
“Article 23 [of the 1951 Convention, ed.] provides that ‘The Contracting States shall accord to refugees lawfully staying in their territory the same treatment with respect to public relief and assistance as is accorded to their nationals’ [emphasis added],” the statement reads.
“Article 24 of the 1951 Convention provides that refugees lawfully staying in the territory of a State party shall be accorded the same treatment as is accorded to nationals with regard to social security, including unemployment, old age and family responsibilities,” the statement continues.
Under the Danish proposal, all refugees and foreigners who have not resided in Denmark for seven out of the past eight years – as well as Danish citizens who have lived outside of the EU – will only be entitled to a new so-called ‘integration benefit’, which is significantly lower than regular unemployment benefits.  New arrivals will not be entitled to paid holiday while on the benefit and the time spent as an asylum seeker does not count toward the residency requirement.
See also: Denmark to reduce asylum benefits
The UNHCR said that despite applying the same rules to Danish citizens who have lived outside the EU, it is refugees who will bear the brunt of the cuts.
“While formally the integration allowance is also intended for Danish citizens who have lived abroad outside the European Union, in reality it will primarily affect refugees and others with a foreign background. UNHCR is thus concerned that the proposed residency requirement to be eligible for the kontant– or uddannelseshjælp and instead introducing a significantly lower integrationsydelse for refugees who are not able to find employment during the first seven years will have a discriminatory effect and that the impact of the proposal will be detrimental for refugees,” the organization wrote.
The integration benefit will pay a single adult with no children receive 5,945 kroner per month before tax, compared to the current 10,849 kroner unemployment benefit – a 45 percent cut. An additional 1,500 kroner per month can be earned by passing an intermediate Danish language exam.
See also: Danish group publishes pro-refugee advertisement
The UNHCR goes on to criticize planned changes to how child and pension benefits are applied to refugees, once again arguing that the proposals violate the 1951 Convention.
Despite the criticism in the UNHCR’s 12-page report, and the criticism of over 30 other organizations, Integration Minister Inger Støjberg stood by the proposed changes.
“The new integration benefit is in no way a sign of discrimination,” she told Politiken.
“It serves to the contrary the very objective goal of needing to be able to keep up with the influx [of refugees] to Denmark. We can’t as it is now, which is why we want to make it less financially attractive to come to Denmark,” Støjberg said.
“It also serves another just as essential goal, which is to give a strong incentive to get a job as quickly as possible,” she added.
Støjberg has repeatedly said that additional restrictions to Denmark's immigration policies will be announced shortly.