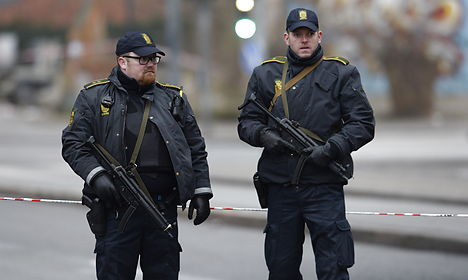 More reports have come in about radicalized inmates since the February 14 attacks than in the previous two years combined. Photo: Claus Bech/Scanpix
The gunman who killed two people during the February 14-15 shootings at a Copenhagen cultural centre and synagogue is believed to have been radicalized while in prison and authorities now seem to be taking the threat more seriously.
Metroxpress reported on Monday that in the ten weeks that followed Omar El-Hussein’s attack, the Danish Prison and Probation Service (Kriminalforsorgen) gave 59 reports warning the Danish Security and Intelligence Service (PET) that 50 individual inmates are suspected of having radical beliefs.
See also: PET knew gunman was 'at risk of radicalization'
Prior to the terror attack, just 37 inmates had been reported over a span of two years. Only seven inmates were reported in 2013, while Kriminalforsorgen warned PET about 16 prisoners in 2014 and an additional 14 in the first weeks of 2015.
The association for uniformed prison personnel, Fængselsforbundet, told Metroxpress that there has been a change in approach since the February attack.
“Today we would rather report one prisoner too many than one too few. It could be prisoners who begin talking about going to Syria or who decorate their cells with terror propaganda,” the association’s chairman, Kim Østerbye, told Metroxpress.
“We have also begun exit programmes for radicalized prisoners in the same way that we do for gang members,” he added.
Metroxpress’s report is built upon a memo from the Justice Ministry. According to the same memo, 30 of the inmates previously reported to PET have been released.
In the wake of El-Hussein’s attacks on the Krudttønden cultural cafe in Østerbro and Copenhagen’s Great Synagogue, PET was heavily criticized for failing to act on warnings that he was at risk of radicalization.
While serving time for a stabbing, El-Hussein was reported three times by prison staff to Kriminalforsorgen for expressing “extreme” views on Islam and the agency to PET in September that they viewed the 22-year-old as an “at risk” case.
PET said however that it had “no reason to believe that the now deceased 22-year-old offender was planning attacks.”
See also: Copenhagen shooter shared cell with Isis supporter
It was also subsequently revealed that despite prison staff telling Kriminalforsorgen that El-Hussein's “extremism is getting worse”, he was moved to a Copenhagen prison where he was placed with a cell mate who openly sympathised with the terror group Isis.
Naser Khader, a spokesman for the Conservatives, told Metroxpress that Denmark clearly has “a huge problem with prisoners who are radicalized in prison”.
“We should do what they do in the Netherlands, where they move the most hard-core Islamists away from the other Muslims so they can’t inspire them,” Khader said.
Martin Henriksen, a spokesman for the Danish People’s Party, called for immediate action.
“There apparently has to be another terror attack before this is taken seriously,” he told Metroxpress.