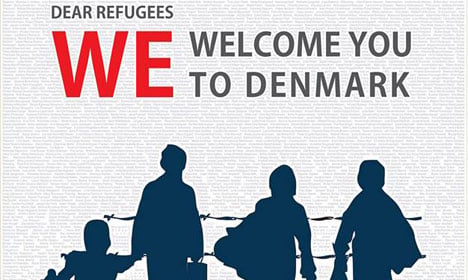 The ad appeared in Monday's edition of The Guardian and will be published in a German newspaper later this week. Image: Velkommen til flygtninge - Nej til Støjbergs skræmmekampagne
A Danish Facebook campaign that began as a response to the government’s announced intention to run anti-refugee advertisements in foreign newspapers placed an advertisement of its own in Monday’s edition of UK paper The Guardian.
The advertisement, which the group reportedly paid around 200,000 kroner for, tells refugees that “we welcome you to Denmark”. Image: Velkommen til flygtninge – Nej til Støjbergs skræmmekampagne
“The Danish government has announced a controversial scheme to deter refugees. Minister of Integration, Inger Støjberg, is planning an international newspaper campaign to advertise the imminent tightening of conditions for refugees in order to stem the influx of people seeking asylum in Denmark. The aim is to deter refugees from coming to Denmark in the first place. But we’re not all like minister Støjberg and the rest of the Danish government,” the ad reads.
“We do not believe that families in war-torn countries should learn that a Danish cabinet member is planning an advertising campaign based on the ill-conceived and erroneous logic that families calculate where they may profit the most from settling as refugees. Not in our name!” it continues.
The initiative, which has over 18,000 followers on Facebook, ends the ad by saying that the group wants refugees to hear “another voice in Denmark – a voice representing peace, solidarity and human decency”.
“That’s why we extend a warm welcome to Denmark and denounce the government’s scare tactics,” the advertisement concludes.
See also: Danish group to publish pro-refugee ads
The group wrote on Facebook that it has raised enough money to place a German version of the ad in “a large German newspaper” later this week.
The initiative’s spokesperson, Marianne Rosenkvist, said she was surprised by how many Danes joined her cause.
“This strengthens our message and it makes the message more powerful that so many ordinary people are uniting behind it. On Facebook we've been able to see that it actually means a lot to people that there is another voice in Denmark. Another voice than the one our minister for integration, Inger Støjberg, is using for her inhumane message aiming to discourage people on the run and, better still, keep every single refugee out,” Rosenkvist said.
Støjberg announced her plans to run advertisements in foreign newspapers – most likely in Turkey – after Jyllands-Posten revealed the contents of a document that human smugglers use to help asylum seekers compare the different levels of benefits in Europe.
See also: Smugglers help refugees compare welfare benefits
Støjberg said that the document vindicates the Venstre government's decision to cut benefits to asylum seekers by up to 45 percent, which critics have argued would do nothing to stem the flow of refugees. She wants to make sure that human smugglers and potential refugees get the message loud and clear.
“The ads will contain factual information on the halving of benefits as well as other restrictions that we will be enacting. That kind of information spreads very quickly,” Støjberg told broadcaster DR.
Denmark saw its asylum numbers nearly double in 2014, with 14,815 people arriving in the course of the year compared to 7,557 asylum seekers in 2013. A June report from the Danish Immigration Service showed that 2015 is on pace to be another record year.
Per capita, Denmark took in the sixth highest number of asylum applications in 2014. Due to its opt-out on EU Justice and Home Affairs, the country is not participating in the European plan to redistribute refugees even though it could end up with Denmark taking in fewer numbers than it does now.
Monday’s advertisement is the second pro-refugee message in The Guardian to come from Denmark in one week. Last Monday, the head of the Danish NGO Refugees Welcome wrote a piece in which she compiled a list of reasons for refugees to seek asylum in Denmark.