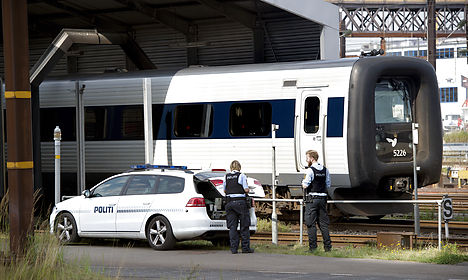 The Friday morning incident cancelled all train traffic for hours. Photo: Bax Lindhardt/Scanpix
A DSB employee reported being attacked while on an S-train just outside of Copenhagen Central Station on Friday morning by two men who then bound him with tape.
See also: Assault shuts down Copenhagen train traffic
The employee also led police to believe that the assailants had placed a suspicious item somewhere along the train tracks between Central Station and Dybbølsbro Station. A search of the area shut down all train traffic for hours on Friday morning, but now the whole thing appears to have been a fake staged by the employee himself.
“Copenhagen Police’s investigation of an incident this morning at Copenhagen Central Station, in which a man explained to police that he was attacked by two assailants whom he surprised in a train, has led to the man being arrested and charged for making a false report and for creating extensive disruptions in train service and the emergency callout of the police,” officers wrote in a press release.
According to police, the DSB employee denied having staged the event and will make a preliminary court appearance on Saturday. Police said that they will push for the court appearance to be held behind closed doors and thus did not want to comment further.
A DSB spokesperson expressed shock over the strange turn of events.
“We are all surprised by what happened. We view this as very serious and will be following the police investigation,” Tony Bispeskov told TV2.
The reported assault occurred shortly after 4am on Friday and shut down train traffic in and out of Copenhagen Central Station for several hours.