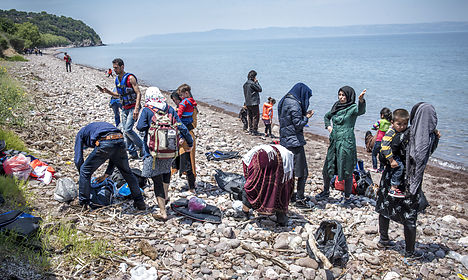 A group of asylum seekers after arriving in Lesbos. Photo: Søren Bidstrup/Scanpix
The Danish branch of the Red Cross has warned that the government’s proposed cuts to the welfare benefits of asylum seekers will increase poverty and damage integration efforts.
Anders Ladekarl, the general secretary of the Danish Red Cross, said on Twitter that he has never before written an official hearing response as negative as the one he delivered to the Integration Ministry on Wednesday.

In the three-page letter, Ladekarl condemns the benefit cuts and says that they will not fulfil the government’s ambitions to limit the number of asylum seekers who come to Denmark.
“The Red Cross is overall worried that the proposal will contribute to increased poverty in Denmark and will have negative consequences for the integration of new arrivals and their participation in society,” Ladekarl wrote.
“Furthermore, it is undocumented that the proposal will have any significant effect on the number of people who choose to seek asylum in Denmark,” he added.
Ladekarl calls on the government to adopt a “holistic” approach to the global refugee situation, in which more people are on the run than at any time since World War 2.
“It is the Red Cross’s opinion that Denmark should house its fair share of the world’s asylum seekers under respectable conditions, contribute to a shared European solution and put its talk about larger efforts in the refugees’ immediate areas into action,” he wrote.
Due to its opt-out on EU Justice and Home Affairs, Denmark is not participating in the EU plan to redistribute refugees even though this could result in Denmark taking in fewer refugees.
Denmark saw its asylum numbers nearly double in 2014, with 14,815 people arriving in the course of the year compared to 7,557 asylum seekers in 2013. A June report from the Danish Immigration Service showed that 2015 is on pace to be yet another record year.
Shortly after taking power, the new Venstre government announced that it would cut benefits to asylum seekers by up to 45 percent and has warned that further refugee and immigration restrictions will be implemented in the near future.
The plans would essentially reintroduce a welfare benefit known as starthjælp that was used by the previous Venstre-run government and subsequently scrapped by the Social Democrat government.
In its letter, the Red Cross referred to a study from 2012 that showed that refugees on starthjælp had “living conditions characterized by poverty” that made it “impossible to pay expenses”, as well as a 2011 study that concluded that “starthjælp pinned refugees down in poverty and worked against integration in several ways”.
The government has defended the benefit cuts by saying that asylum seekers will receive payments similar to what university students receive under the stipend system known as SU. Ladekarl, however, points out that unlike students, asylum seekers are unable to supplement the benefit by taking a job or accessing student loans. The government’s proposal also would bar asylum seekers receiving the new benefit from taking holiday, which the Red Cross said will violate their basic rights.
Ladekarl also cast doubts on the reduced benefits’ effect on getting asylum seekers off the public dole and in to a job.
“[Danish] companies say that there will be an extraordinary need for manpower in the coming years. In order for Denmark to benefit from the resources and competencies that come here, it requires that the new arrivals have the opportunity to live a life that is as normal and active as possible from day one,” Ladekarl wrote.
The Red Cross general secretary concluded his three-page letter with an appeal for “a humane and dignified acceptance of refugees in Denmark”.
The full letter can be read here, in Danish.