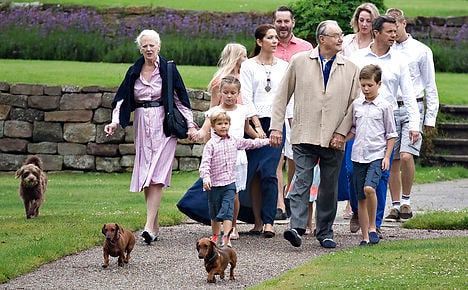 Photos of the queen smoking during the Royal Family's annual summer photo had the foreign press up in arms. Photo: Henning Bagger/Scanpix
It is well-known that 75-year-old Queen Margrethe is a longtime smoker but recent pictures of her smoking around her grandchildren have created a stir outside of Denmark.
Last week, during the Royal Family's annual portrait at Graasten Palace, photographers snapped away and caught Queen Margrethe puffing on a cigarette. The photos were enough to cause a fuss in news sites like Britain's Daily Mail and Australia's News.com.au.
“Put that out, Grandma! Defiant smoker Queen Margrethe of Denmark raises eyebrows after lighting up while walking with Crown Princess Mary's young children,” the Daily Mail wrote.
Under the picture of the Queen smoking with her granddaughter, the British newspaper added: “Too close for comfort?”.
See also: Queen Margrethe still beloved by Danes at 75 The reports express concern about Queen Margrethe smoking near her grandchildren. Photo: Henning Bagger/Scanpix
Australian website News.com focused on the reaction of Crown Princess Mary.
“With her incredible figure and perfect complexion, Australia’s own Crown Princess Mary is known for her love of all things healthy. So one can’t be entirely sure of what she thinks of her mother-in-law’s smoking habit — especially when she’s prone to lighting up around her grandkids,” the Australian site wrote.
“But when your mother-in-law is Denmark’s Queen Margrethe, it may be a case of sucking it up when it comes to her nasty habit,” the site added before detailing the queen's “love for ciggies”.
The foreign reports expressed concern over the effects of secondhand smoke on eight-year-old Princess Isabella and four-year-old Prince Vincent.
See also: Queen Margrethe wades in to immigration debate
Queen Margrethe has been criticized before for her smoking habit although most of the criticism comes from abroad.
After the foreign press once again brought up the queen’s habit, a spokeswoman for Astma-Allergi Danmark declined to weigh in directly on Queen Margrethe but said that it can send the wrong signal to smoke around children.
“It makes kids think it isn’t dangerous if they see one smoking. It sends a signal that it is okay. And one can worry that children will think that if their grandmother and grandfather smoke, that they can too,” Anne Holm Hansen told BT.
The Royal House told BT that they had no comment on the issue.