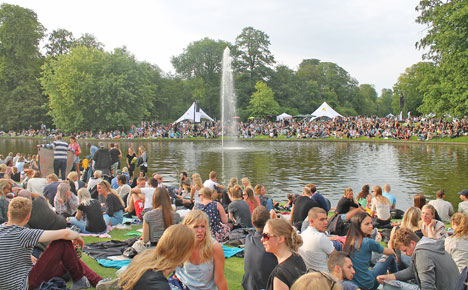 The 2015 Stella Polaris festival in Frederiksberg Park. Photo: Sheryl Oben/Survey Bee
The Stella Polaris festival, which began in 1997 in Aarhus, is designed as a mix between an all-out party and a relaxed day in the park where attendees are entertained by a line-up of DJs that include top names in the chill-out and downtempo genres such as Kelela, Jimmy Sommerville, Museum of Love and Lulu Rouge.
See the photo gallery here
“Speakers are strewn across the grounds, wrapping their electronic blankets of dubby and jazzy slo-mo sounds round the dark green August trees and the thousands of happy people, sunbathing in the grass, dozing off in bean bags or picnicking on chequered blankets,” organizers write on the festival’s website.
Stella Polaris has now expanded to a four-city tour, with stops in Sønderborg, Aarhus, Kolding and Frederiksberg. Photographer Sheryl Oben from Survey Bee was at the festival’s final stop and shared these photos of the action.
Click through on the photo below for the full gallery.