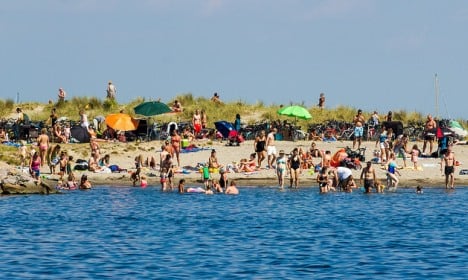 It's the headline many of our readers have been waiting for.

There have been very few good things to say about the summer weather so far, but at least August is off to a glorious start.

For only the second time this summer, Danes can look forward to a consecutive number of days where temperatures will reach and possibly even surpass 25C.

“A fairly powerful low pressure system west of Scotland is moving a little to the north, while a high pressure system is intensifying from the east, allowing for the flow of warm air from the south and south east,” according to DMI’s forecast for the week.

We have kicked off the week with a dry and sunny Monday, with temperatures ranging from 20–25C, and all the way up to 27C in southern Denmark.

Tuesday and Wednesday will also be largely dry and sunny, with the exception of parts of Jutland, as a cold front with rain showers and thunder passes over the country from the west. Temperatures on Tuesday are expected to top out between 23-28C followed by a more modest 18-23C on Wednesday.

DMI expects cloudless skies on both Thursday and Friday, with temperatures rising up to 27 degrees and only a mild wind, although the country may be hit by thunderstorms on Friday night.

The good weather is expected to continue into the weekend – and possibly into next week as well – according to the institute’s preliminary forecast.