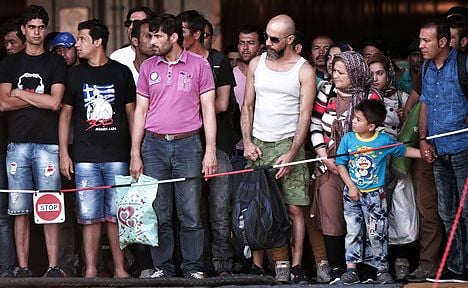 Hundreds of migrants wait to disembark from a ferry originating from the Greek island of Lesbos earlier this month. Photo: LOUISA GOULIAMAKI

Human smugglers have a document that helps asylum seekers compare the different levels of welfare benefits they can receive in various European countries, according to a report in Jyllands-Posten on Thursday.

According to the newspaper, Danish Integration Minister Inger Støjberg was informed of the welfare comparison document when she met with officials from the EU border agency Frontex in Warsaw last week. The document compares monthly waiting times for family reunification as well as the monetary amount of monthly benefits that are available to refugees in countries including Denmark, Germany and Sweden.

Støjberg said that the document justifies the Danish government's decision to cut benefits for refugees in an effort to deter asylum seekers from coming to Denmark.
See also: Denmark to reduce asylum benefits
“Of course living conditions – including finances – mean something for which country asylum seekers will seek out. Why else would human smugglers have prepared and published this systematic breakdown of countries including Denmark on a website where they provide services based on this kind of information,” Støjberg wrote in a Facebook post that included a screenshot of the comparison document.

The document compares conditions in Germany, the Netherlands, Sweden, Norway and Denmark, telling asylum seekers how much money they can expect, the type of accommodation they will find and how long it will take to obtain residency.
A spokesperson for Frontex said that the organization is not certain if the welfare comparison document in question is still in circulation but said that some groups of asylum seekers seem to have a lot of information about the conditions in individual European countries.
“We know that human smugglers gather this information and pass it on as part of a package to their potential customers,” Ewa Moncure told Jyllands-Posten.
The Local has reached out to Frontex for comment.
News of the welfare comparison document was seen by Denmark’s centre-right parties as proof that the nation’s generous welfare system functions as a magnet for potential refugees.
“This confirms one’s suspicions that there are human strugglers who have their eyes on the conditions in those countries in which they help asylum seekers reach,” the Danish People’s Party spokesman Peter Skaarup told Jyllands-Posten.
Skaarup, whose party last week proposed releasing a video meant to scare refugees away from Denmark, said that criticism of the government’s cuts to welfare benefits for refugees now “ring hollow” in light of the document’s surfacing.
See also: DF wants video to tell refugees to stay away
Others however continued to insist that the influx of refugees into Denmark has little to do with the national welfare system and everything to do with the fact that there are currently more refugees in the world than at any other time since World War II.
“There isn’t a single expert who can document that there is a connection between the number of refugees a country receives and the benefits it offers. The influx into Denmark mirrors the international stream of refugees,” Social Liberals (Radikale) spokesman Andreas Steenberg told Jyllands-Posten.
Denmark saw its asylum numbers nearly double in 2014, with 14,815 people arriving in the course of the year compared to 7,557 asylum seekers in 2013. A report from the Danish Immigration Service last month showed that 2015 is on pace to be yet another record year.
Per capita, Denmark took in the sixth highest number of asylum applications in 2014. But due to its opt-out on EU Justice and Home Affairs, it is not participating in the European plan to redistribute refugees even though it could end up with Denmark taking in fewer numbers than it does now.
See also: Denmark declines to take part in migrant relocation
Shortly after the new Venstre government took power, it announced that the unemployment welfare benefits that asylum seekers were entitled to under the previous government will be replaced by a new – and significantly lower – so-called ‘integration benefit’. A single adult with no children will receive 5,945 kroner per month before tax, compared to the current 10,849 kroner unemployment benefit – a 45 percent cut.
Støjberg said again on Thursday that additional restrictions are on their way.
“Something is coming on general living conditions and something is coming on family reunification,” she told Jyllands-Posten.