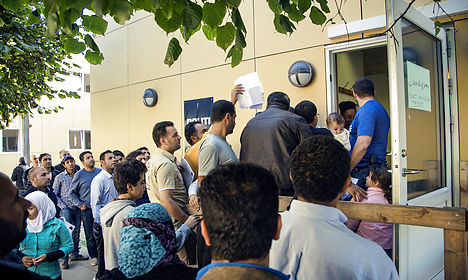 Photo: Nikolai Linares/Scanpix
A survey conducted by Politiken Research showed on Thursday that Danish municipalities are struggling to house refugees.
Waiting times for permanent housing in some municipalities exceeds three years and local officials have resorted to erecting temporary pavilions in order to deal with the shortage.
“We’ve reached the breaking point,” Knud Kristensen, the mayor of Vesterhimmerland Municipality in northern Jutland, told Politiken.
Sixty-one of Denmark’s 98 municipalities responded to Politiken’s survey and nearly half of them reported that they are struggling to find homes for around 12,000 refugees.
In Vesterhimmerland, Kristensen said his municipality has ran out of housing options in towns and villages and temporary options in former schools and care homes are also filled to the maximum. Local officials are now considering putting refugees in houses out in the country.
“But how would they get to shopping options and language schools, if we spread them out so much?” Kristensen asked rhetorically.
Vesterhimmerland has resorted to ordering temporary pavilions and gazebos that will be set up on available grounds. Eight other municipalities said that they are doing the same.
One of those is Allerød Municipality on Zealand. Its mayor, Jørgen Johansen, acknowledged that the pavilions are not a permanent solution and said that the municipality may have to resort to building more housing.
“But that will put a strain on our economy,” he told Politiken.
Not all municipalities are struggling with the problem, however. In Odense, permanent housing is immediately available for the 131 refugees it has been allocated.
But the problem is not new. In June 2014 – only halfway through what ended up being a record year for refugees in Denmark – eight of ten municipalities reported that they were struggling to find permanent housing solutions for refugees. And it is only expected to get worse, as the municipalities will be tasked with housing another 12,000 refugees next year.