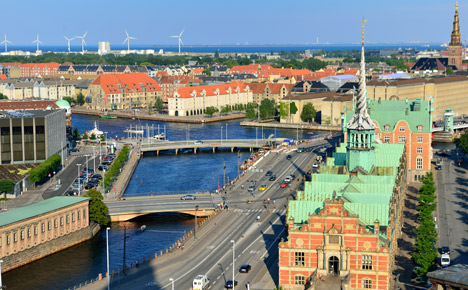 There's plenty to see and do in Copenhagen, but don't waste your time and money on the wrong things. Photo: Colourbox
As The Local reported earlier this week, tourism is booming in Copenhagen while the rest of Denmark is being largely ignored by foreign travellers. Given the steady influx of visitors to the Danish capital, the popular spots are going to be jam-packed and many of them fail to live up to the hype. With that in mind, we’ve put together a list of what to avoid and offered some cooler alternatives.
Skip this: The Little Mermaid
Do that: Gefion Fountain Gefion Fountain. Photo: KLMircea/Flickr
Let’s just say it like it is: The Little Mermaid is an over-hyped, over-crowded disappointment. It’s tiny and swarmed with tourists. Instead of joining the throngs there, head down Langelinie to the much more impressive Gefion Fountain. The fountain's sculpture depicts the Norse goddess Gefion driving a team of oxen, which according to legend, she used to create Zealand by ploughing away a piece of land from Sweden.
Skip this: Canal tour boats
Do that: GoBoat The article's author playing captain on a GoBoat.
Why queue with the masses for a spot on one of the many canal tour boats cruising the harbour when you can command a boat of your own? With GoBoat, you can be your own captain on boats big enough to fit eight around a central picnic table, making it ideal for dinner and drinks on the water. It’s also incredibly Danish: the boat itself runs on solar power and passengers can help keep the harbour clean by fishing rubbish out and trading it in for a surprise.
You can take the exact same route as the tourist boats (taking you past the Little Mermaid by water and thus avoiding those crowds mentioned above) if you wish, or you can just do your own thing. As an added bonus, all those tourist boat passengers will see you captaining your boat and take pictures of you assuming you’re some sort of seasoned Danish sailor.
Skip this: Tivoli
Do that: Bakken Bakken. Photo: Colourbox
We have to include a disclaimer here: we actually love Tivoli and totally recommend it. But the amusement park Bakken north of the city is well worth a visit and is arguably better if you're just in it for the rides. As the oldest amusement park in the world, it mixes history and nostalgia with new thrills. And unlike Tivoli, the entry is free, although you do have to pay for the attractions. Bakken is less crowded than Tivoli and is located in the wonderful nature area Dyrehaven, which was recently added to Unesco's World Heritage list. So after a day of roller coasters, the famous clown Pjerrot and plenty of junk food, you can visit Dyrehaven and get up close and personal with wild deer and check out the impressive Hermitage Hunting Lodge (Eremitageslottet).
See also: Denmark gets two more sites on Unsesco list
Skip this: The Round Tower
Do that: Church of Our Saviour Not only is the Church of Our Saviour a better climb, it will take you to the beautiful homes of Christianshavn. Photo: Wonderful Copenhagen
Copenhagen is a city of towers and spires and there are plenty of options for climbing high to get a bird’s eye view of the city. One of the city’s most-visited spots is the Round Tower (Rundetårn) but once you reach the top there you’ll look with envy across town at the Church of Our Saviour (Vor Frelsers Kirke), with its elegant winding staircase. You can get twice as high at the Church of Our Saviour and unlike the Round Tower you have to work a little bit harder for it and deal with both claustrophobia and a fear of heights. While that may not sound appealing, the payoff is at the top when you can take in an astonishing view and feel a sense of accomplishment.
Skip this: GoBike
Do this: Rent a normal bike GoBikes will immediately out you as a tourist. Photo: GoBike
Copenhagen is the best city in the world for cyclists – really – and there is no doubt that it is seen best from two wheels. But forget about the expensive flops known as the GoBike. These overpriced and overly-complicated city bikes have been shunned by locals, and with good reason. Do you really need a tablet-mounted bike with an electric motor when any old bike and a paper map would do just fine? The city is filled with bike rental options. Pick one of those instead of taking one of the distinctive white GoBikes and immediately outing yourself as a tourist who has just been ripped off.
See also: Costly Copenhagen city bikes get another chance
Skip this: Amalienborg Palace
Do this: Rosenborg Castle Rosenborg Castle. Photo: Jorge Brazil/Flickr
OK, we get it. You’re in Denmark and you want to see some castles. Fair enough. While most people will go to Amalienborg Palace in the misguided hope that they’ll catch a glimpse of Queen Margrethe (you won’t — the royals only live there in the winter), we’d rather go to Rosenborg Castle.
Built in 1606 for King Christian IV, the castle itself is a sight to behold and is home to the crown jewels but the real reason to pick this over Amalienborg is its surroundings. The beautiful King’s Garden (Kongens Have) is one of the best places in the country to kill a few hours on a summer day. Do as the Danes do and pack a picnic and lounge in Denmark’s oldest royal garden. As an added bonus: you don’t even have to miss out on the Royal Guard. The guard begins its daily march through Copenhagen at Rosenborg Castle at 11:30am, so you can catch them there rather than their much more crowded noon arrival at Amalienborg.