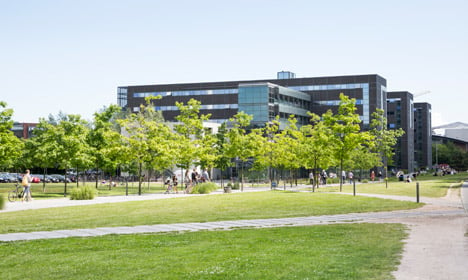 A concerned resident was worried about a potential shooting at Copenhagen Business School. Photo: CBS
Copenhagen Police on Wednesday responded to a report of a mysterious individual seen dressed in military garb and holding a weapon at the Frederiksberg Metro station near Copenhagen Business School.
“According to the informant, it was a roughly 20-year-old man in a camouflage jacket who was wearing a mask and had a military rifle with a telescopic sight,” police spokesman Henrik Stormer told news agency Ritzau.
When police arrived on the scene however they thankfully found that it was an advanced toy gun.
“It turned out to be two 13-year-old boys who were playing a hardball weapon,” Stormer said, referring to an advanced type of air rifle that looks similar to a real weapon but shoots small plastic bullets.
Although the situation wasn’t as dangerous as first believed, the two boys may still face legal repercussions as it is illegal for anyone under the age of 18 to own that type of toy gun.
Stormer said the boys were taken to their homes and police will now consider whether or not to pursue illegal possession charges.
In the YouTube video shown below, Danish kids are shown playing with guns similar to the one from Wednesday's incident.