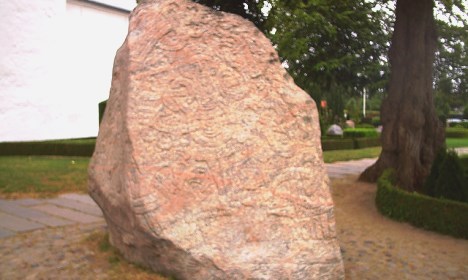 In the Danish town of Jelling are two runestones dating back from the 10th century, the largest of which tells the story of the king Harald Bluetooth’s christening of the Danes and is often referred to as “Denmark’s birth certificate”.

According to retired teacher Niels Bandholm, the dimensions on the other side of the runestone, depicting Jesus Christ surrounded by several bands, were carefully planned to be in accordance with the mathematical principles of phi and pi.

Phi is a value which can be rounded up to 1.618034 and was discovered by the Greek mathematician Euclid, who referred to it as the ‘golden ratio’.

Phi is used to solve the so-called ‘quadrature of the circle’, in this case meaning that the distance between the fingertips of the depiction of Christ on the runestone is equal to the circumference of the band surrounding his waist.

What this means is that the carver of the stone had a deep understanding of the concept of phi, as well as pi (which represents the radius of a circle’s circumference to its diameter, usually rounded up to 3.14).

“I have presented the idea to archaeologists at the Moesgaard Museum, but they were sceptical,” Bandholm told Kristeligt Dagblad.

“But I think that there is an ancient knowledge of geometry and [what were considered] ‘magic numbers’ that could have reached Denmark from Arabia via Charlemagne’s empire,” he added.

The former teacher has in the past argued that the entire Jelling complex is designed in accordance with an advanced mathematical calculation, and stands as a testament to the rich understanding of mathematics that Danes at the time possessed.

See also: Vikings were in Denmark earlier than thought

“I believe that this indicates that it has all been devised in a single sitting with the purpose of replicating the quadrature of the circle, where the circular aspects [of the complex] symbolizes the heavens, while the linear aspects symbolize earth,” Bandholm explained, pointing to the fact that other religious symbols across the world such as the Pyramid of Cheops was designed in the same way.

While archeologists and historians are sceptical of Bandholm’s theories – he has also previously speculated that several churches on Bornholm may be designed along mathematical principles – he remains adamant that there exist links everywhere between math and old religious beliefs.

“The thought of the circular heavens and linear earth is connected via the number of life, phi, is rooted in old wisdom and mathematical beliefs that have been passed on through centuries. But it unfortunately looks like it has been lost in these times,” Bandholm said.