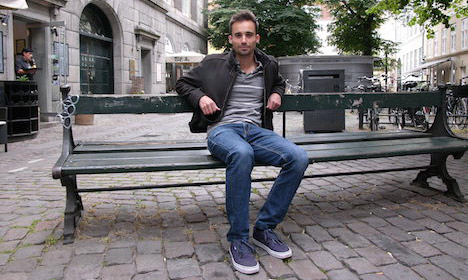 Javier López enjoys living in Copenhagen, even with its weather. Photo: Agustin Millan

Javier López is a content editor at software development company e-conomic. Born in Cataluña, Spain, the 31-year-old journalist has only been in Denmark since December after a career that has taken him to numerous other countries.

Why did you decide to come to Copenhagen?

I was in Germany when I was offered a job as a content editor at a company called e-conomic, which develops accounting software. I manage the Spanish language version of the website. I was living in Munich and after a few Skype meetings and a personal interview in Copenhagen, I got the job.

When did you first leave Spain?

In September 2010 I went to Hamburg. I decided to move after losing my job at a newspaper, and departed as many people did those days. But I moved to have the experience of living abroad. I had a German girlfriend then so I moved to be with her, and since the first day I took up German lessons. Now I'm able to speak it, so that was worth the effort.

Do you have a cool job in Denmark? Get in touch with us!

Do you think that being able to speak German helped you to get the Copenhagen job?

Speaking German is seen as a bonus here. For example, the company I'm working for in Copenhagen has two big markets: Germany and Spain. I only work on the Spanish content but it is always better to be able to communicate with your co-workers.

What is your favourite thing about Denmark?

The city of Copenhagen. Living in an international city like this is important to me. I'm not sure if I would have accepted moving to another Danish city! I like the fact that it’s an interesting society and the welfare system beats almost every place, including Germany. Danes also have a very open mentality and accept many different points of view. I think that being a small society forces you to open to the world.

Why do you think Denmark is so ahead in terms of its quality of life?

I've lived abroad for several years now. I've been in the UK, the US, Austria and Germany and all of those countries have a great quality of life. But for me the key to Denmark is its solid institutions that make the country work. Corruption does not exist here, and having high standards of education allows a better society. In Denmark you can leave your laptop at the table and nobody will touch it. It´s also easier to manage a smaller country.

As a Spanish-born expat, what do you see as the biggest difference between Germany and Denmark?

It may sound weird, but it's the weather. It's a lot windier here and the humidity makes for very cold Danish winters. That shapes the way you live. I started working in Copenhagen in December and when I got off work, I was only in the mood to go home. It was hard the first months, but I could handle it because I loved my work and the good atmosphere amongst my colleagues.

And the hardest part about being an expat?

At some point you go though some very rough stretches. I've had times when I had no job, almost no friends and that made me really think about going back home. But I think about it this way: I have no family responsibilities now and my way of life doesn't include big expenses so I can do well, have my own apartment and money to travel every now and then. I'm happy with that.

Do you recommend other people to go abroad?

I'd say yes as a personal experience. It´s also good to know how other countries operate and compare it with your home. Also living as an expat is very important for one's self discovery.

You left a job as a journalist. How do you see the future of journalism?

In my opinion, journalism is headed toward being strictly freelance – it´s almost the only option nowadays. You might not be willing to work for free but there are three other people who will. The negative consequence is that news sites (at least in Spain) are getting used to do that, and the journalist's struggle is getting worse.

So you´re not willing to go back to journalism?

Not in the short term. I'm not currently looking for a new job. I don't know if I'll stay here for many years. The conditions are great and the job terms are unbeatable but you always miss your home and have the thought of getting back home someday.

What are the things you miss most?

Mediterranean culture as opposed to Scandinavian. In the south of Europe, there is a lot more human contact. But the downside of that it's that is a very self-satisfying culture; we don't care about new cultures. However a lot of Danes have lived abroad and they know a lot about other cultures, which can help them to see the big picture.

As a foreigner in Denmark, what do you think about the immigration debate?

Denmark has a very generous welfare system. Some people think that this system is endangered by immigrants. There are a lot of people living off social welfare and that group may see more immigration as something that may jeopardize the status quo. Some may want a welfare state only for Danes but that sort of attitude is not something I've ever experienced in Copenhagen.