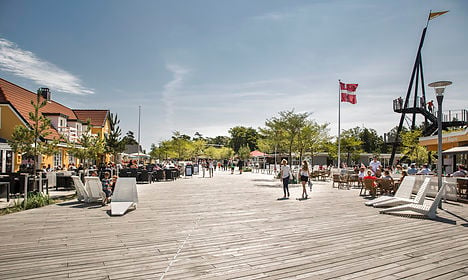 Marielyst on the island of Falster. Foreign tourists are staying away from Denmark's coastal areas. Photo: Nikolai Linares
Despite growth in the capital, Denmark’s tourism industry as a whole is lagging behind neighbouring countries like Germany and Sweden.
Several international reports this year have shown that outside of Copenhagen, the Danish tourism industry is suffering. The World Economic Forum’s (WEF) Travel & Tourism Competitiveness Report, released in May, ranked Denmark as just the 27th best country for tourism, down significantly from its 16th place ranking in the 2011 index.
That report came on the heels of a study from the Danish magazine Momentum released a study of European tourism growth between 2004-2014 that concluded that only four countries – Kyrgyzstan, Slovakia, Luxembourg and Cyprus – performed worse than Denmark over that time span.
According to the Confederation of Danish Industries (Dansk Industri – DI), Denmark doesn’t have enough to offer tourists and its investments are failing to keep pace with nearby countries.
“Our product is simply not good enough. When you compare [Denmark] to its neighbouring countries, one sees that they have invested massively in new, exciting experiences,” DI’s head of tourism, Sune Jensen, told Berlingske.
DI is calling for an across-the-board improvement of the Danish tourism industry with upgrades to overnight options, restaurants, entertainment offerings and better infrastructure like additional bicycle paths.
Jensen said that Denmark’s high prices make the country less appealing to tourists. According to DI, prices in Denmark are 30-40 percent higher than in Germany and the Danish service level doesn’t match its prices.
“We are a bit more expensive when you go out to eat, go to a museum, spend the night in a hotel and so on. And tourists naturally expect that when products are 30 percent more expensive, they should also be 30 percent better. But they aren’t,” Jensen told Berlingske.
He added that those same high prices also prevent private actors from making the necessary investments to improve the situation.
“The way our tax and price levels are today, it is a challenge. therefore people are less likely to plunge themselves in to large investments because they worry whether they will get that money back,” Jensen said.
The previous Danish government green-lighted a controversial plan to allow development along the nation’s coastlines in a bid to boost tourism. The plan has been criticized for opening up environmentally-protected stretches of the coast, which some say will not only pose environmental problems but will also ruin the pristine stretches of nature that draw people to the areas in the first place.
Government figures show that the number of overnight stays in the nation’s coastal and nature areas has fallen by 27.5 percent over the past decade. With the exception of Liberal Alliance, all political parties in parliament signed on to the plan last summer and the current Venstre government plans to carry it through.

PARTNER CONTENT
Winter escapes: treat yourself with a trip to the ‘Venice of the north’
Url copied to clipboard!