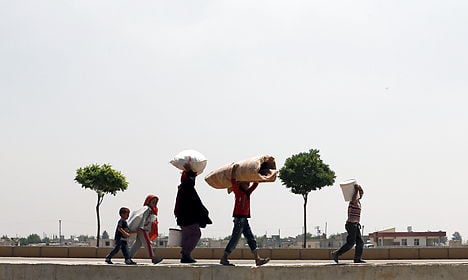 Syrian refugees walk to the Akcakale border gate to return their homes in the northern Syrian town of Tel Abyad, in Sanliurfa province, Turkey. Photo: Umit Bektas/Scanpix
Migration ministers from all 28 EU member states met on Monday in an attempt to finalize European Commission plans to resettle 40,000 refugees based in Italy and Greece and another 20,000 asylum seekers from outside of Europe.
By the meeting’s end, the ministers had agreed on a plan that would see 32,256 of the asylum seekers redistributed among European countries.
Denmark, however, was not one of them. Danish integration minister Inger Støjberg said that while the EU has a difficult problem to solve, Denmark is not willing to take any additional refugees.
“[This is] based alone on the background that we take in so many asylum seekers. So we won’t be taking any of the 40,000 that under discussion today,” she told Danish media in Brussels according to news agency Ritzau.
Per capita, Denmark took in the sixth highest number of asylum applications in 2014 and the European Commission’s plan would force countries that take in far fewer refugees than Denmark to heavily step up their contributions.
But Denmark’s opt-out on EU Justice and Home Affairs means it is not obligated to be part of a united European solution to the Mediterranean migrant crisis.
See also: Denmark's 'sad' position in EU asylum plan
Prior to the meeting in Brussels, Sweden’s migration minister Morgan Johansson said that “all EU member states have to be prepared to take their responsibility”.
“This is the worst humanitarian crisis in our time,” Johansson told reporters.
Sweden, which already accepts the most asylum seekers per capita in the EU, has offered to relocate just over 1,800 migrants as part of the scheme. Germany, which takes the greatest number of refugees in real terms, has signed up to 12,000.
At an informal European meeting earlier this month, Denmark did agree to take in a total of 1,000 of the 20,000 asylum seekers that have not yet come to Europe over two years.
Newly-elected Prime Minister Lars Løkke Rasmussen has promised Danes a referendum by Christmas time on ending the nation’s EU Justice and Home Affairs opt-out and replacing it with an ‘opt-in’ model. But his party Venstre and the other four Eurocentric parties backing the referendum plan have made it clear that they are for maintaining Denmark’s exemption on EU asylum and immigration policies.
See also: Denmark lays foundation for ending EU opt-out
Denmark was granted four opt-outs from the 1992 Maastricht Treaty: defence; justice and home affairs; the maintaining of the kroner rather than the euro; and an opt-out on citizenship rules that was cancelled out by the Amsterdam Treaty that took effect in 1999.
Denmark last held a referendum on its relationship to the EU in 2000, when voters once again rejected the euro.