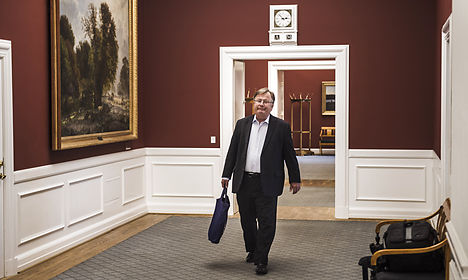 The Danish government’s decision on Thursday to contribute 1.05 billion kroner (141 million euro, $153 million) via the European Financial Stabilisation Mechanism (EFSM) to a Greek bailout has been met with heavy criticism by some parties in the parliament.

The loan is only expected to function as so-called 'bridge financing' until a long-term bailout package can be negotiated with Greece.

Finance Minister Claus Hjort Frederiksen wrote in a letter to the European Affairs Committee on Thursday that the extraordinary measure is necessary due to there being no other viable short-term alternatives to save Greece from bankruptcy.

“The [Danish, ed.] government has an understanding of the exceptional and difficult situation for Greece as well as the eurozone countries’ need for sufficiently fast initiatives,” Frederiksen wrote.

Later on Thursday, Frederiksen told news agency Ritzau that a way had been found to ensure that there were no risks involved with issuing the loan.

“We have been given a guarantee for our share of the loan, meaning that we will not lose any money if Greece fails to pay it back. The government therefore supports the loan as a model that all countries can live with – including the United Kingdom, which has been the most critical,” Frederiksen said.

The decision is far from popular among the other blue bloc parties however. The Danish People's Party (DF), Conservatives, and Liberal Alliance have all said that they do not support the decision.

“This is problematic as this is a euro predicament. It’s a problem that the Greek government has been given such a long leash. For 40 years, Greece has not implemented any reforms at all and neglected their own country, so we are very sceptical about this decision,” Conservative MP Brian Mikkelsen told Danish news site Finans.

DF is also very sceptical of the decision, according to party spokesman René Christensen.

“I expect Claus Hjort to report back on what kind of guarantee we have been given for our billion kroner if the Greeks do not live up to their obligations. It is also interesting what kind of signals we are sending with this measure. Will this set a precedent for similar situations in the future?” Christensen told Politiko.

Despite resistance from the government’s allies in the blue bloc however, the decision whether to approve the loan lies entirely with the Venstre government.

The government was given the mandate to issue loans of this type in 2010 without needing to call a vote on the matter, a representative of the Ministry of Finance told Jyllands-Posten.

The EFSM is a fund contributed to by all 28 EU member states, but in 2012 countries agreed that it would no longer be used to bail out struggling countries in the eurozone, instead creating the European Stability Mechanism (ESM), which only draws on the resources of countries using the single currency.