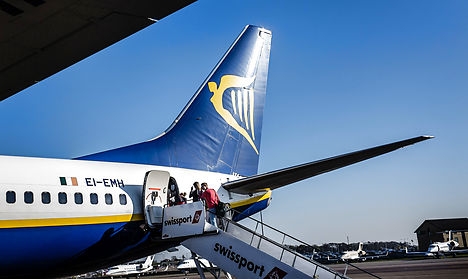 Photo: Thomas Lekfeldt/Scanpix
With Ryanair announcing on Tuesday that it will close its base at Billund Airport unless Danish unions drop their planned strike, Norwegian could be looking to make a move.
“We are closely watching the situation at Billund Airport. We are already very pleased with our routes to Spain from Billund,” Daniel Kirchoff, a spokesman for the Scandinavian budget carrier, told broadcaster DR.
See also: Ryanair to close Billund Airport base
Ryanair said on Tuesday that it will continue to operate 12 of its 14 summer routes to and from Billund but will cut its four winter routes down to just one. Routes to Budapest, Malaga and Tenerife will be dropped, and Norwegian may be particularly interested in adding the two Spanish destinations to its Billund offerings.
Kirchoff told DR however that Norwegian has not yet made any formal plans for new routes and will first wait and see if the Ryanair closure happens on Friday as announced.
Two other airlines that operate out of Billund – the partially state-owned SAS and Danish Air Transport – both said that they are not immediately eyeing new options at the airport in the wake of a Ryanair pullout.
Ryanair is abandoning its bases in both Billund and Copenhagen as a result of a strike warning from the Services Union, a member of the Danish Confederation of Trade Unions (LO). According to airline spokesman Eddie Wilson, the “misguided actions” of the unions will result in “over 130 highly paid pilot and cabin crew jobs” leaving Denmark.
“We sincerely regret any inconvenience caused to our people and our customers by this week’s base closures in Copenhagen and Billund, however the Danish unions have made clear that as long as we have any base in Denmark they intend to engage in secondary strikes at Copenhagen, despite admitting they have no members among Ryanair pilots or cabin crew,” Wilson said.
LO on Tuesday admitted that the Billund closure would cost Danish jobs in the short-run but was confident that a new carrier would fill Ryanair’s spot.
“The market is such that if someone pulls out, others typically come in. I’m confident that Billund’s CEO is good at attracting other airlines, otherwise something is fundamentally wrong. I don’t think there is. I think that Billund operates a good and healthy business,” Lizette Risgaard, LO’s deputy chairwoman, told DR.
Billund CEO Kjeld Zacho Jørgensen however sounded less confident.
“It would be wonderful if that’s the way it is, but it’s not that easy. It typically takes between two and four years for new companies to take over the routes,” he told TV2.
Ryanair’s closure of its Billund Airport base will take effect on Friday at 11pm unless the airline and unions can come to an agreement. The airline’s total traffic at the airport will be cut in half, going from 700,000 annual passengers to over 300,000.
Ryanair officially relocated its Copenhagen Airport base to Kaunas, Lithuania on Tuesday.