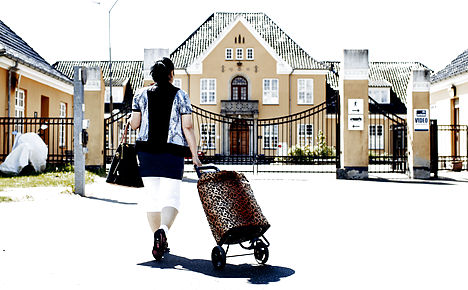 DF wants asylum seekers to stay out of Denmark. Photo: Bax Lindhardt/Scanpix
“If you want to seek happiness in Europe, Denmark is not the right place.”
That’s the message that the anti-immigration Danish People’s Party (DF) wants to send loud and clear to asylum seekers.
DF spokesman Martin Henriksen is calling on Denmark to replicate Australia by releasing a video in English and Arabic that will discourage asylum seekers from making their way to Danish shores.
“Too many people are coming to Denmark to seek asylum and we want them to stay away from Denmark. That is the message we wish to formulate to human smugglers and potential asylum seekers around the world,” Henriksen told Politiko.
Henriksen pointed to a video made by the Australian government, in which a stone-faced General Campbell tells asylum seekers “you will not make Australia home”.
Henriksen wants Denmark to make a similar message that will include information about new restrictions on gaining asylum in Denmark and bringing family members to the country as well as the newly-announced cuts to refugees' benefits.
Governing party Venstre initially expressed a willingness to consider DF’s idea but as backlash to the proposal began to spread on Wednesday, Venstre spokesman Jakob Ellemann-Jensen threw cold water on the idea.
“I don’t think the Australian video is an example to replicate in Denmark. The video is a bit tough and I don’t think it is a Danish way to communicate. It’s fine if it works in Australia, but I can’t immediately see it being used in Denmark,” Ellemann-Jensen told Politiko.
Australia has implemented a strict policy of denying entry to boats filled with refugees and sending them out of Australian waters.
This is not the first time that DF has proposed using video to keep unwanted elements out of the country. In 2010, the party argued that an introductory film about Denmark should include shots of topless women sunbathing on the beach. DF contended that the bare breasts would keep extremists away by signalling that Denmark is a country with liberal attitudes and gender equality. The proposal did not get adopted.