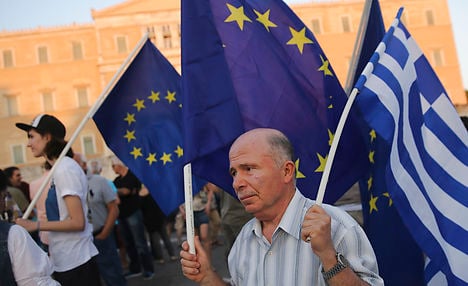 Eurozone leaders struck a deal with Greece on Monday. Photo: Alkis Konstantinidis/Scanpix
The latest chapter of the Greece crisis involves the EU working out which funds to use for its new financial aid programme for the troubled southern European country.
Eurozone leaders struck a deal in Brussels on Monday after an all-night negotiation to establish the preconditions for Greece being offered the package of between 82 and 86 billion euros over the next three years.
But by Wednesday there was a strong debate over whether taxpayers from outside the eurozone – including Denmark – would end up providing some of the funding after EU Commissioner Valdis Dombrovskis said that using money from the European Financial Stabilisation Mechanism (EFSM) was the “best possible way” to help tackle Greece's acute financial needs.
He said that he aware there were “serious concerns” among non-eurozone countries about the idea.
THE EFSM is a fund contributed to by all 28 EU member states, but in 2012 countries agreed that it would no longer be used to bail out struggling countries in the eurozone, with an alternative fund called the European Stability Mechanism (ESM) created instead, drawing only on the resources of countries using the single currency.
Denmark’s finance minister, Claus Hjort Frederiksen, has already expressed the country’s resistance to using the EFSM to help Greece, telling the other European finance ministers at a meeting last week that non-eurozone countries don’t support the plan.
“At the meeting, Osborne from the UK, Magdalena Andersson from Sweden and I expressed our sceptisim over this plan,” Frederiksen told Berlingske Nyhedsbureau.
His Swedish counterpart Andersson said on Wednesday that EU taxpayers living outside the eurozone should not be concerned about funding the latest Greek bailout, insisting that Brussels has listened to her country's concerns.
“The proposal now being discussed is quite different from the proposal that was up there yesterday. Certainly you should use the EFSM, but non eurozone countries should stand without risk,” she told Swedish news agency TT.
Andersson said she was seeking a guarantee that EU countries that don't use the single currency would not have to pay out if Greece misbehaves over its scheduled repayments.
Earlier on Wednesday, the UK also said it opposed non-eurozone contributions to the ESFM being used to help Greece.
“We’ve been clear we do not think British taxpayers should be providing funding for the eurozone,” a spokesperson for British Prime Minister David Cameron told The Guardian newspaper.
Greece has been asked repay seven billion euros of debts in July after accepting its third bailout programme since 2010 following Monday's intense talks in Brussels.
Stock markets across Europe, including in Scandinavia, had been jittery in the weeks ahead of the deal but calmed on Monday in the wake of the agreement.
Reacting to news of the Brussels deal on Monday, Robert Bergqvist, Chief Economist at one of Scandinavia's largest banks, SEB, said that he felt Greece was over the worst of its problems but still had a long way to climb.
“There are huge question marks about the whole euro area. Should a country be able to leave?” he told Swedish newswire TT.
Andreas Hatzgeorgiou, chief economist at the Stockholm Chamber of Commerce and Greece expert, added: “You should not think that this spells the end of the Greek crisis. It is the end of the most acute phase.”