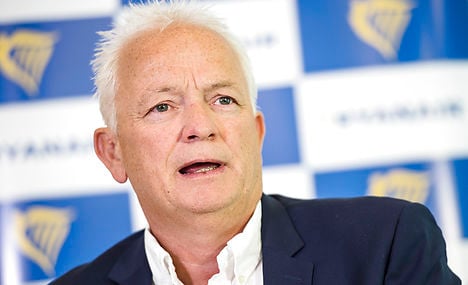 Ryanair's Eddie Wilson announced the Billund closure on Tuesday. Photo: Claus Fisker/Scanpix
Ryanair on Tuesday announced that it will close its base at Billund Airport on Friday due to Danish unions’ plans to carry out a strike at the airport.
The decision comes on the same day that Ryanair officially shuts down its recently-opened base at Copenhagen Airport in order to avoid a strike by the unions.
The airline will continue to fly to and from both airports.
Ryanair has operated for years without any conflicts at Billund Airport, where it faces less competition and staff have fewer job opportunities.
The airline will now move to its aircraft to London Stansted and a third aircraft to Dublin. The airline said that it will continue to operate 12 of its 14 summer routes to and from Billund but will cut its four winter routes down to just one. Routes to Budapest, Malaga and Tenerife will be dropped, but the airline will continue to fly from Billund to London.
Ryanair’s total traffic at Billund Airport will be cut in half, going from 700,000 annual passengers to over 300,000.
“We sincerely regret any inconvenience caused to our people and our customers by this week’s base closures in Copenhagen and Billund, however the Danish unions have made clear that as long as we have any base in Denmark they intend to engage in secondary strikes at Copenhagen, despite admitting they have no members among Ryanair pilots or cabin crew,” airline spokesman Eddie Wilson said in a press release.
Wilson said that the “misguided actions” of the unions will result in “over 130 highly paid pilot and cabin crew jobs” leaving Denmark.
Following a decision by the Danish Labour Court (Arbejdsretten), the Services Union, which is a member of the Danish Confederation of Trade Unions (LO), warned that it will initiate a strike against Ryanair starting July 18 unless a collective agreement is negotiated with the airline before then. LO announced that it will be join in a so-called ‘sympathy strike’, which would make it incredibly difficult for Ryanair to operate flights to and from Copenhagen.
After a meeting between airline officials and union representatives broke down last week after just eight minutes, the unions said that they would extend their actions to target Ryanair’s operations in both Billund and Aarhus. Two days later, the airline made good on its threat to relocate its Copenhagen base to Lithuania.
Wilson said that the airline would consider returning its operations if the unions would back off their demand for Ryanair to enter into a Danish collective bargaining agreement.