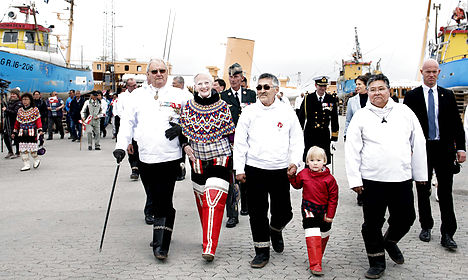 Queen Margrethe and Prince Consort Henrik in Upernavik in western Greenland on Sunday. Photo: Linda Kastrup/Scanpix
Queen Margrethe has been in Greenland since July 8th for a two-week visit to the autonomous territory of Denmark.
The queen began her visit of the sparsely-populated island by visiting the the Station Nord military and science station, the Ittoqqortoormiit settlement and the Thule Air Base.
Queen Margrethe was joined in Greenland by her husband Prince Consort Henrik on Sunday.
PHOTO GALLERY: See photos from the royals' Greenland trip
Travelling aboard the Royal Yacht Dannebrog, the royal couple will tour the western part of Greenland. They will visit Upernavik, Ukkusissat, Qullissat, Saqqaq, Ilulissat, Qasigiannguit, Kitsissuarsuit, Sisimiut, Kangaamiut and Maniitsoq before ending their Greenland tour with a trip to the capital of Nuuk on July 22nd.
Greenlanders will give the royals demonstrations of seal hunting and traditional kayak techniques and visit local museums, health care facilities and activity centres.
The queen and prince consort’s Greenland itinerary can be found here.
Click on the photo below for the full gallery.