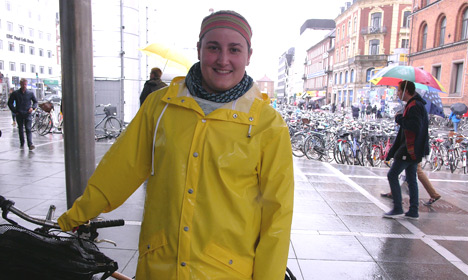 Esther Sebastian said that it's difficult to make Danish friends and adjust to the local weather. Photo: Agustin Millan

In the latest instalment of My Danish Career, we talk to Spanish teacher and entrepreneur Esther Sebastian, 27, who has been living in Copenhagen for almost three years and runs Spanish Connection, a company that provides private Spanish language lessons.

Born in Zaragoza, Sebastian told The Local her keys to getting to know the Danish people and setting up a business in Denmark.

Why did you choose Copenhagen?
I was meant to go to Stockholm but I landed a job interview in Copenhagen. I really wanted to live in an Scandinavian country but even though that interview didn’t go very well, I found here a nice place to live and ended up staying here.

What´s the biggest difference between Spain and Denmark?
People behave in a whole different way. They interact with each other but they don´t meet people by chance. I mean, the Danes are used to having these very long friendships with their school friends and it´s not so easy to join a group.
Is it possible to make Danish friends?
I think it's difficult to make friends here. I've been here for three years and I even have a Danish boyfriend! But that does not mean I belong to a group of Danish friends. At least not the kind of friendship in which you can share personal stuff. I assume people here don't trust so easily in new friends as we do in Spain.
So, how did you meet your danish boyfriend?
A Swedish friend introduced us to each other. He needed someone to practice Spanish with and I needed to practice my Danish skills. The easiest way to meet Danish people is to share a regular activity with them. In that kind of environment they are more likely to open themselves up to strangers and they're very kind and helpful people.
Tell us about your business – was it hard to set up your language academy?
Yes, because I studied to be a teacher not an entrepreneur. So I had to learn the hard way how to make profits, do advertising and take care of all the paperwork. But in Denmark it's way easier than in Spain. Here you can give it a try and you only will pay taxes when you're earning money.
What's been the hardest thing about your time in Copenhagen?
I think probably the language. Of course everyone here speaks English but if you want a job here and want to get involved in the daily life, it's absolutely necessary to be able to speak Danish. I only could have a basic conversation until a year of intensive Danish lessons! The weather is also a challenge, not everyone can handle the cold days and the dark during the winter. You can feel very lonely here.
And what about the things you love about Copenhagen?
The feeling that there are new opportunities everyday. There's always something going on. Here you have a lot of opportunities even though that doesn't mean they will be easy.
See also: Denmark largely ignoring the Spanish language
Your business is teaching Spanish – are Danes actually interested in the Spanish language?
I think so. I see both old and young people joining Spanish lessons maybe because they want to travel to Spain or South America. I have the feeling that a lot of my high school students are changing the more useful German for the exotic Spanish language.
What to Danes and Spaniards have in common?
They both love to party and to be active. In my experience, partying is where we all are more open and, at least until the next day, we can all be best friends.
What was the most useful lesson to settle in Denmark for you?
Definitely learn Danish. That made me feel more involved with the city. People living here for ten years have told me that they regret not learning Danish since the very beginning. You can live here only speaking English but it will never be the same.