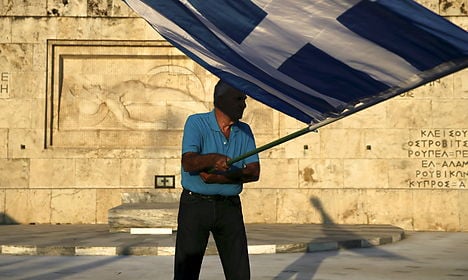 A pro-euro protester holds a Greek flag during a rally in front of the parliament building in Athens on Thursday. Photo: REUTERS/Alkis Konstantinidis/Scanpix
If this weekend’s EU top meeting ends with Greece leaving the eurozone, Denmark is willing to send humanitarian aid to the Greek people, Foreign Minister Kristian Jensen said on Thursday night.
“I still hope that the Greek government will deliver, but if that doesn’t happen it will clearly have serious consequences for the Greek population and Denmark will be ready to help,” Jensen told Berlingske.
Jensen’s comments came just before the Greek government handed the EU a new reform list late on Thursday in the hope of obtaining fresh financial aid. The Greek parliament is expected to vote on the reforms on Friday. Eurozone finance ministers will the gather on Saturday to discuss the proposals, before all 28 EU heads of government meet at an extraordinary summit on Sunday.
A further vote in the Greek parliament would then be needed to turn the reforms into law, reports Reuters.
The EU meeting on Sunday will be Lars Løkke Rasmussen’s first international appearance since becoming prime minister following Denmark’s June 18th vote. Since taking office, Rasmussen has not made any public statements about the Greek crisis.
Jensen said that Greek politicians have brought the country’s crisis on themselves but the average Greek shouldn’t have to pay the price.
“When people are in need, we shouldn’t first ask them which party they voted for,” he said.
Several Danish political parties said they would support Jensen’s call to help the Greeks financially.