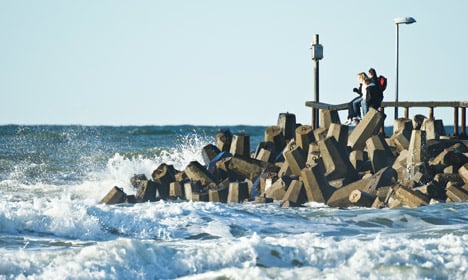 Thursday will be cold and windy, especially along the coasts. Photo: Colourbox
DMI issued an official warning on Thursday that winds up to 93 km/h will blast the western and southern parts of the country during the course of the day.
The storm warning applies to the west coast of Jutland, Denmark’s southern border with Germany, parts of Funen, Lolland-Falster and the northwest parts of Zealand.
Because of the high winds, DMI has also warned that some bridges may have to be closed to traffic.
Accompanying the winds will be significantly cooler temperatures expected to top out at 15C as well as local rains.
“It will be a cold and windy day and mostly cloudy weather with rain or showers that can come with localized thunder,” DMI’s forecast read.
DMI spokesman Frank Nielsen told Berlingske that the timing of the wind storm, coming just mere days after the summer’s hottest day thus far, may catch people off guard.
“This isn’t the time of year in which people expect wind gusts of storm strength. It can perhaps surprise people,” he said, adding that those cycling, sailing and camping should be extra careful.
DMI said that the winds should taper off by Friday but temperatures are predicted to remain below 20C through the beginning of next week.