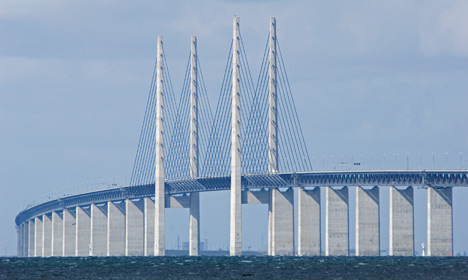 Real-life crime is an increasing problem on the bridge made famous by the TV crime drama. Photo: Colourbox
Copenhagen-area commuters may face increased border controls when travelling to and from the southern Swedish city of Malmö due to that city’s increasing violence, which has seen shootings, explosions and even hand grenades over the past two months.
Read more about the Malmö violence on The Local Sweden
Regional police in southern Sweden put the rising violence down to an increased import of illegal weapons and are calling for tougher border controls on the Øresund Bridge between Sweden and Denmark in a bid to tackle the problem.
“What makes us notice criminality more is the amount of illegal weapons in the city. We seize far more weapons and we notice that they are much more accessible than before,” Mats Karlsson of Malmö Police told Berlingske.
Some 1,300 illegal weapons were seized in Sweden last year and most are believed to have come via the same route used by more than 30,000 commuters every day – the Øresund Bridge between Copenhagen and Malmö.
See also: 'The bridge made Malmö a suburb of Copenhagen'
“I would wish that it was easier to stop random cars than it is today, and that we more easily could have real checks in periods like this. I don't mean permanent border controls, but over a certain period, so that we knew that if something was on the way, we could stop everyone,” Karlsson said.
But Gerd Battrup, researcher in cross-border police co-operation at the University of Southern Denmark, does not believe tougher border control is key to stemming the tide of violence. She instead advocates closer co-operation between Swedish and Danish police.
“The introduction of border controls on the Swedish side would be terrible for the thousands who commute across the border every day to work in Copenhagen,” she told Berlingske.
In late May, Danish and Swedish police officers were involved in a chase across the bridge, which was made famous internationally by the gritty crime drama ‘The Bridge’ (Broen). Four Danes were arrested and police found two machine guns that they had tried to ditch in the bridge’s tunnel.