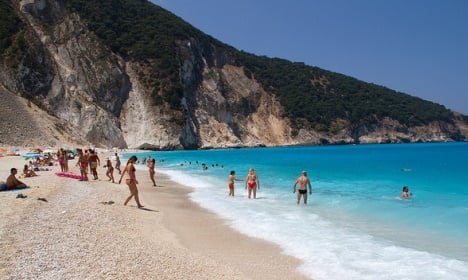 The likelihood of a Greek exit from the eurozone continues to increase by the day, and analysts warn that should Greece end up bringing back the drachma as its national currency, it will have severe consequences on the country’s economy.

But it may be good news for Danish tourists. According to Danske Bank analysist Steen Bocian, travellers from Denmark will be able to “live like kings” on a Greek holiday if the drachma returns.

The drachma is expected to be a very weak currency compared to the Danish krone or the euro, meaning that tourists from Denmark and the eurozone countries would be able to get a lot more for their money than is the case today.

“We can probably expect that it [the drachma, ed.] will at least initially not be worth very much,” Bocian told Berlingske, noting that this will also carry some advantages for Greece.

“The advantage of having a weaker currency is that you improve your competitiveness. But you have to remember that this will not be easy for the Greeks, as the country does not produce anything that is particularly appealing to anyone else besides the Greeks. They do not export very much,” he added.

Tourism is however a major industry in Greece, and a weaker currency may make the country an even more appealing destination for Danes looking for a little more sun than what Scandinavia has to offer.

“Spain and Italy were in a similar situation back in the 1970s and 80s. In those countries, a Dane could live like a king because the currency kept getting weaker. That will also be the case with Greece until it [the drachma, ed.] has found a more stable value,” Bocian explained.

See also: Denmark: Keep Greece in euro despite 'no' vote

Asked what he thought was the likelihood of Greece leaving the eurozone, he said that coming deadline for payment on a loan issued by the European Central Bank (ECB) on July 20th is critical.

“July 20th is a more rigid deadline than we have had previously, because if the Greeks fail to make that payment, they will have an unpaid loan with the ECB. This could lead to the ECB pulling the plug on the Greek banks, and then we will be facing a complete meltdown of the Greek economy,” Bocian told Berlingske.