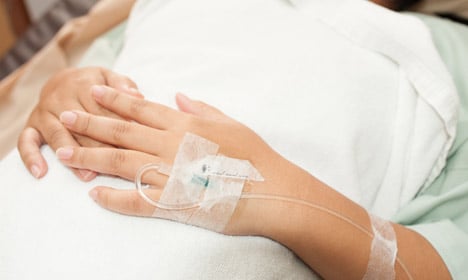 Was there ever really a 'Kemoland'? We may never know. Photo: Colourbox

A Danish cancer patient going under the name of ‘Clara Maria’ obtained a large following on her Instagram profile in the weeks leading up to her purported death on Tuesday, but allegations have now emerged on social media that her identity – and story – was a hoax.

An Instagram user named ‘Kemoland’ claimed to be a 21-year old woman from Aalborg suffering from terminal cancer and posted running updates about her treatment over the past six months.

‘Clara Maria’ published her last post just past midnight on Tuesday, telling her followers: “The bed in the [hospital] room is empty. That’s because I have become so ill over the course of the evening that tonight will be the last time I close my eyes. And I will be doing so at home in my softest pyjamas surrounded by the people I love,” Kemoland wrote, encouraging her 18,000 followers to live life to the fullest.

Two additional posts were then published to the Kemoland, one supposedly from her doctor claiming that she passed away three hours after writing her last update, and one from her family asking not to be contacted by the media.

The profile has since been taken down and some media outlets who wrote about the attention Clara Maria was getting have also removed their stories.

The hospital where she was supposedly receiving treatment has declined to confirm whether or not she has indeed passed away, nor that her identity was real.

However, the Danish tabloid BT alleges to have been informed by “other sources” that the woman had passed away.

Shortly after her purported death however, some of the pictures posted to Kemoland's Instagram account were revealed to have been copies of existing images that had already been floating around on the internet.

“Kemoland was apparently not what he/she purported to be. Despicable!” wrote Instagram user pigernesbilledbog, who posted two side-by-side comparisons of photos used by the Kemoland account.

Many people on social media have also questioned why a doctor would agree to post on a patient’s Instagram profile, and how 'Clara Maria' would have had the strength to make a final Instagram post only three hours before passing away.

Finally, people have also wondered why no one in Clara Maria’s social circle has come forth to confirm the identity of the woman.
Comments on one Instagram post drawing parallels between one of Clara Maria’s posts and an identical one from another user varied from outrage to moderation. Many have pointed out that it has yet to be confirmed that it is a hoax, and that even if it is, that no real harm was done.
“Regardless of whether or not it’s a hoax, her texts made us reflect on life and give our loved ones an extra hug,” Instagram user jannitorm wrote.
Others disagreed, arguing that it is a sick story to fabricate.
“There are some of us fighting with this every single day, and it’s nothing to joke about, regardless of what your intentions may be. I really hope – not that I hope someone died – that this wasn’t a hoax,” another Instagram user, stigspige, wrote.
Nathalie Larsen, a digital and social media manager at the communications bureau Geelmuyden Kiese, said that we may never know the real story behind the Kemoland profile.
“There isn’t really anyone who can verify if this profile is real or not. She has told her story very intimately while also avoiding to provide any personal details about herself. It will be difficult to ascertain if she existed or not,” Larsen told BT.