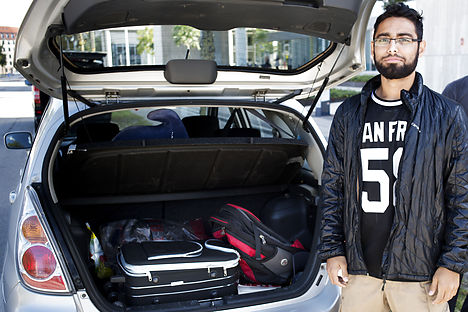 Alisiv Ceran was the subject of an intense manhunt even though he was merely nervous about an exam. Photo: Claus Bech/Scanpix
Alisiv Ceran, a then 21-year-old student at the University of Copenhagen, was nervously preparing for an exam in American foreign policy last August, sweating as he used his journey on a local S-train to cram in the last bit of knowledge he could glean from a book on terror.
A passenger who was watching Ceran thought his behaviour seemed suspicious, particularly after he knocked over his bag and a bunch of cables spilled out. Ceran quickly gathered them up and left the train at Nørreport Station, Denmark’s busiest transport hub.
See also: Nervous student causes manhunt in Copenhagen
Unbeknownst to him, the female passenger contacted the Copenhagen Police to report her concerns and an intense city-wide manhunt was set off, complete with police officers armed with machine guns.
While he was taking his test, Ceran’s photo was released by the police and subsequently plastered all over the media. Once police tracked Ceran down at the university they quickly determined that he was “completely clean” and that the entire thing had been a misunderstanding. And those cables his co-passenger was worried about? They were simply for a printer that Ceran needed for the exam.
While Ceran was able to laugh off the incident after the conclusion of the hours-long manhunt, he decided in September to sue the Copenhagen Police for damages.
On Tuesday, the public prosecutor granted Ceran compensation to the tune of 35,000 kroner. Although it was less than half of the 75,000 kroner he sought, Ceran’s lawyer was satisfied with the outcome.
See also: Innocent student sues over police manhunt
“He was cleared of any suspicion but on the other hand, the exposure he faced was the reason he had to go out and try to clear his name in the media,” Erbil Kaya told broadcaster DR.
When announcing the lawsuit in September, Kaya called what happened to his client “unprecedented”.
“The strength and extent to which my client completely unwilling became the subject of negative attention naturally allows him to be compensated,” Kaya wrote in a press release.
“His pictures were published by virtually every media outlet and he was made an example out of in front of the entire population. He was deemed to be a potential terrorist,” he added.
Although Ceran was granted the compensation, the public prosecutor’s office determined that the police responded properly to the passenger's concerns.
“They believe that the police had to react to this. They don’t think that the police did any thing wrong, but on the other hand my client experienced this harassment,” Kaya told DR.
The ruling is likely to pave the way for future compensation claims against the police, Kaya said.