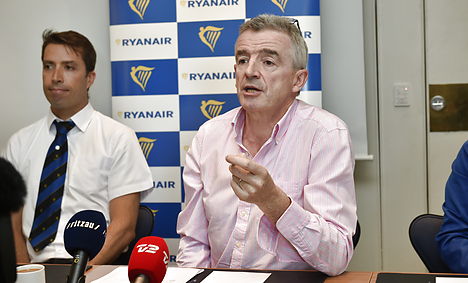 Ryanair CEO Michael O'Leary brought Danish pilots and personnel to Copenhagen on Tuesday. Photo: Jens Nørgaard Larsen/Scanpix
The CEO of budget Irish airline Ryanair, Michael O’Leary, held a press conference in Copenhagen on Tuesday with members of the airline’s Danish personnel in an attempt to refute what he called “complete rubbish” and “false claims” from the unions about Ryanair’s pay and conditions.
“We operate a very efficient, very productive system and our people work for us because they choose to work for us,” O’Leary told TV2 just before the press conference. “They have high pay and job security, which SAS and Norwegian employees don’t at the moment.”
The Ryanair press conference came just days after the Services Union, which is a member of the Danish Confederation of Trade Unions (LO), warned that it will initiate a strike against Ryanair starting on July 18th unless the airline enters into a Danish collective bargaining agreement with its staff in Copenhagen.
Ryanair has said that it will abandon its Copenhagen base if the unions make good on their threat and O’Leary said he is working to find a solution.
“We’ve written to the Danish unions asking them to withdraw the threatened sympathy strike in Copenhagen on the 18th of July. If they withdraw that action, we’ll reverse our base closure and save the jobs here in Denmark,” he said.
“If you want to save these high-paying jobs for pilots and cabin crew and keep those jobs in Denmark, withdraw the action,” he told the unions.
O’Leary said that its personnel are already covered by bargaining agreements and thus “we are not going to have some Danish agreement imposed on us”.
The planned action from the Danish unions comes after the Danish Labour Court (Arbejdsretten) ruled last week that the labour unions have the right to strike against Ryanair.
But O’Leary said on Tuesday that doing so would simply mean “destroying high-paid, tax-paying jobs here in Denmark”. He said the airline would follow through on its plan to drop its base in the Danish capital and that if the unions target Ryanair’s operations in Billund, where it has operated uncontroversially for years, it would close that base as well.
“In which case, the whole entire effort of the Danish unions will have been entirely unsuccessful. We will continue flying to Copenhagen, there will be a significant cut in the traffic at Billund [and] all of the high-paying jobs for pilots and cabin crew and many handling agencies in Billund will now be destroyed by these selfish actions by Danish unions that do not represent any Ryanair workers,” he told TV2.
LO has said that it will join the Services Union in a sympathy strike on July 18th. Because an LO sympathy strike would bar unions including 3F, Dansk Metal and HK from doing work for Ryanair, it would make it nearly impossible for the airline to operate out of Copenhagen Airport.