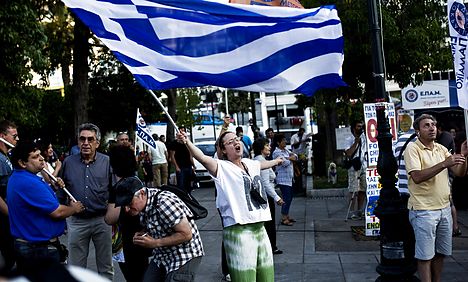 A Greek 'no' supporter celebrates in Athens on Sunday. Photo: Angelos Tzortzinis/Scanpix
Denmark’s Foreign Minister Kristian Jensen said on Monday that he hopes that Greece can remain a part of the euro despite Greek voters resounding ‘no’ to the eurozone’s term’s for the country keeping the single currency
“I am very disappointed in the result. I think it will be hard for Greece to find a solution with the creditors that are so essential for the Greek banks. If the Greeks can’t get a new emergency loan, the banks will run out of money very soon. The [Greek] people have put themselves in a completely unknown situation,” Jensen told broadcaster DR.
“I hope the Greeks can stay in the euro. The best would be if the Greeks would accept the necessary reforms to get their economy standing again. It is the best for Greece if we can continue the cooperation,” he added.
On Twitter, Jensen wrote that the “EU should fight” to keep its cooperation but stressed that ultimate responsibility for what happens next rests with Greek PM Alexis Tsipras.

Danish MEP Morten Messerschmidt had a completely different take on the outcome of the referendum and said that Greece should immediately drop the euro.
“It doesn't make any sense to keep Greece as a euro country. Instead, we should be helping Greece leave the euro in an orderly fashion so that they can remain within the inner market but not as a euro country,” Messerschmidt told Politiko.
More than 60 percent of Greek voters voted against the conditions of its latest bailout, rejecting further austerity after years of cuts following the financial crisis.
The move leaves Greece facing a possible financial collapse and exit from the euro.
Tsipras has already spoke to French President Francois Hollande over the phone and he is set to meet the leader along with German Chancellor Angela Merkel in Paris on Monday.
Since Denmark is not in the eurozone, the result of the referendum is not likely to have an immediate direct impact on the Scandinavian country but with the Danish krone pegged to the euro, the Greek vote could also end up affecting Denmark’s central bank, Nationalbanken.
See also: Danish stocks plummet as 'Grexit' looks likely
Denmark could also suffer as a result of wider economic uncertainty in Europe.
By contrast, Germany, France, Italy and Spain have all lent substantial sums of money to Greece.
The euro held steady against the kroner on Monday morning, with 100 kroner buying 13.41 euros, the same as before the Greek referendum.
Danish travellers are still being warned to withdraw cash before setting off for Greece, because many Greek shops and restaurants are only accepting cash in the wake of the crisis.