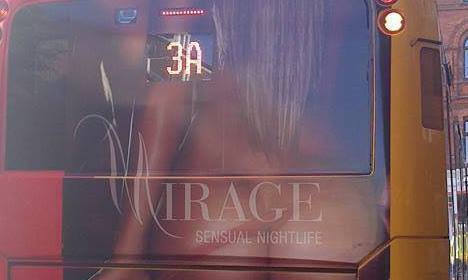 Movia, the company which operates most of Denmark’s public bus transportation, has been hit by controversy once again due to a new racy advertisement on some of their vehicles – this time for a strip club.

The ad for the strip club Mirage, which reveals a nude woman from the back, prompted a complaint on Movia’s Facebook page by a Copenhagen student which has been shared 2842 times in the past week.

Also featured in the ad is a hashtag which translates into English as 'Real men meet at Mirage'.

Senior manager from the company Søren Englund told TV2 that the ads would be taken down.

“An assessment error has been made,” Englund said. Does this cross the line? Photo: Mette Cristine Schou Frandsen/Facebook

Englund added that Movia outsources the posting of ads on their buses to agencies whose job it is to assess if they “cross a line,” and that in this instance, the ad was found to be on par with the long-running ad for the Nygard plastic surgery clinic.

Nygart has been running ads on public buses in Copenhagen since 2007 that feature a pair of surgically-enhanced breasts without a thread of clothing to obscure the surgeon’s fine work. Although the ads have led to spirited public debate in the past, they have remained a mainstay and now hardly raise an eyebrow with the natives.

Englund does not feel that the ads can be compared however, as the Mirage one is taking it a step too far.

“It's bordering on pornography. The ad is really big. You can't really avoid seeing it,” Englund told TV2.

Movia has also been in trouble recently for another advertisement campaign urging people to boycott products from Israeli settlements, which was eventually dropped.

It was later discovered that an Israeli lobbying group was behind the campaign to take the ad down.