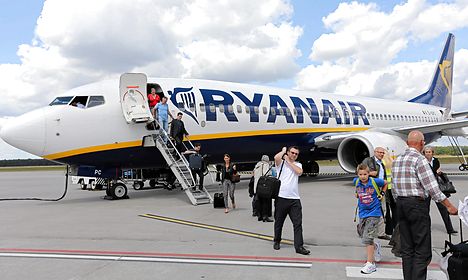 The Services Union, which is a member of the Danish Confederation of Trade Unions (LO), warned that it will initiate a strike against Ryanair starting July 18 unless a collective agreement is negotiated with the airline before then, according to DR.

The announcement comes a day after the Danish Labour Court (Arbejdsretten) ruled that the labour unions have the right to strike against Ryanair.

LO has also announced that it will be joining the Services Union in a so-called ‘sympathy strike’, which will effectively make it well-nigh impossible for Ryanair to operate flights to and from Copenhagen.

“The goal for LO remains to achieve a collective agreement for the Ryanair personnel in Denmark, and we will preliminarily base our decisions not on what Ryanair says [in the coming days, ed.], but what Ryanair does,” wrote Peter Koch Palshøj from LO in a press release.

Although Ryanair has flights operating out of both Copenhagen Airport and Billund airport, the strike will initially only affect flights from Copenhagen.

The airline has already been boycotted by a number of Danish municipalities, including the city of Copenhagen, whose mayor became personally involved in a war of words against Ryanair.

If the airline does not agree to enter into negotiations on a collective agreement however, LO is prepared to expand the strike to include Ryanair flights in Billund as well, according to Berlingske.

Ryanair has repeatedly rejected the notion that its operations in Denmark should be a concern of the labour unions, arguing that “Ryanair is a company with good employee conditions” and that its “presence in Copenhagen will create many new jobs,” as the company’s personnel director Eddie Wilson said at a February press conference.

The airline has previously warned that if the court ruled in the unions’ favour, Ryanair would drop its Copenhagen base, which it did yesterday shortly after the ruling.

Ryanair has also said that they will appeal the ruling handed down by the Danish Labour Court, and that they will take the case to the EU, but Copenhagen University professor Jesper Jørgen Due notes that no such course of action exists for the airline.

“There is no possibility to appeal the Danish Labour Courts’ rulings – when it has made a decision, that’s it,” Due told DR.

Due also added that he believed the court’s decision was “by the book.”

“If that little airline with underpaid staff should have the ability to threaten the regulatory procedures affecting the entire Danish workforce, then that would be pretty far out, wouldn’t it?”