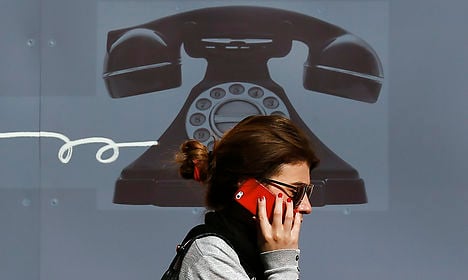 Mobile phone roaming has been a hot topic in Denmark and the European Union, with holidaymakers complaining of hefty charges when they go abroad and foreign workers often forced to sign up to new domestic deals to avoid paying extra fees.

European Digital Economy Commissioner Günther Oettinger breathed new life into the long-running debate this week after he told reporters in Germany that he wanted to abolish the controversial fees within the next two years.

“From the second quarter of 2017, roaming fees in the EU will probably fall away,” he said.

Oettinger's announcement comes just over a month after the European Commission dropped plans to abolish roaming charges from 2016 after objections from telecoms companies in smaller member states.

But a new compromise had to be reached after consumers' organizations and the European Parliament protested vociferously.

“If the end of roaming comes in 2017, companies have a year longer compared with the old plans to conform to the new rules,” Oettinger said.

“And consumers will see yet again that they profit from the single market in telecoms. Roaming fees have already sunk a great deal.”

Oettinger believes that the EU must consolidate its telecoms market – pointing to the 280 companies across the union compared with four in the US.

“To become more competitive and consolidate their networks, many more companies will merge in the coming years,” he said. “That should lead to the European telecoms industry playing a bigger role on the global stage. But competition has to be assured.”

Danish Member of the European Parliament Jens Rohde, who has been personally involved in the negotiations, welcomed the commissioner's comments.

“Despite great scepticism and resistance from some of the member states, we have finally managed to abolish the fees. We have made a historic decision that will benefit both citizens and companies in Europe, whose expenses relating to mobility and communication will fall dramatically,” Rohde wrote in a press release.

According to the Danish MEP, roaming charges will be reduced up to a quarter even before June 2017, meaning that a call would not cost more than 0.05 euro per minute, an SMS 0.02 euro, and a megabyte of data 0.05 euro.