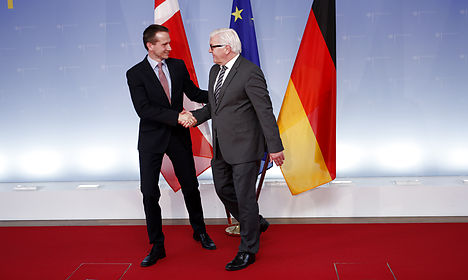 Kristian Jensen (L) visited his German counterpart, Frank-Walter Steinmeier, on Tuesday. Photo: Danish Foreign Ministry/Scanpix
Denmark’s new foreign minister, Kristian Jensen, was in Berlin on Tuesday to tell his German colleagues that border controls are coming.
See all of Denmark's new ministers here
Jensen told news agency Ritzau that he met with German Foreign Minister Frank-Walter Steinmeier to explain Denmark’s plans for increased controls at the border.
“It is important to say that even though we want sharper controls as an assurance against crime and human smuggling, it is also important that it occurs within the framework of our shared playing rules, in other words within Schengen,” Jensen said.
Jensen said that the new Venstre government would not pursue permanent physical barriers at the German border but rather “something that is within the Schengen rules”.
“We will suggest something that is within the Schengen rules and there will be a dialogue with Brussels and the EU Commission, but also with our neighbouring countries,” Jensen said.
The Danish Foreign Ministry confirmed the move, which is aimed at combatting illegal immigration and smuggling.
“There won't be a border barrier and it's not… on the border. There will be checks in the border areas,” Foreign Ministry spokesman Lars Peter Levy told AFP.
Increased border controls is one of the major demands of the Danish People’s Party (DF), which came out of the June 18 election larger than Venstre but has remained out of the government due to the two parties’ failure to come together on key issues.
See also: Border controls send 'wrong signal', leaders warn
DF successfully convinced the former Venstre government to implement permanent border controls for several months in 2011, which set up a legal battle between Denmark and the EU. That was avoided when the Venstre-Conservative government was swept out of power in September 2011. Now that they are back at the helm, Jensen said that Venstre will approach the issue differently this time around.
“Some of what created a lot of attention in Europe back in 2011 was that there wasn’t a preceding dialogue. There were many myths about what we were proposing back then. This time we will attack it differently,” he told Ritzau.
According to Jensen, his meeting in Germany was positive.
“What Steinmeier and Germany are paying attention to is that what the Danish government is coming with will be within the options given by Schengen […] Steinmeier accepted that we are engaged in a process that is within the Schengen rules and with dialogue with our neighbour countries,” Jensen said.
Denmark is a member of Europe's passport-free Schengen zone, which means that once migrants have arrived in the country they can travel freely elsewhere in the other 25 nations in the bloc.
The Danes are not the only ones currently looking at how to increase border controls while remaining with the framework of the Schengen agreement.
France's top administrative court said on Monday that border controls on migrants at the Italian frontier were legal and did not violate the agreement, which created Europe's passport-free zone.