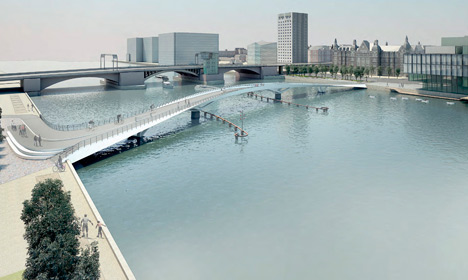 The new bridge will provide an alternative to the busy Langebro, seen in the background. Illustration: Team BuroHappold Limited
Life continues to get better for two-wheeled commuters in the world’s best cycling city.
The winning design for a cycling and walking bridge alongside Langebro was announced this week, the latest in a series of new city bridges meant to make commuting easier for the tens of thousands of Copenhageners who choose not to travel by car.
The new bridge will allow cyclists and pedestrians to avoid the traffic-heavy Langebro by taking a lower-lying and slightly curved alternative designed by British engineers BuroHappold Engineering and architectural firms WilkinsonEyre and Urban Agency. Illustration: Team BuroHappold Limited
The yet-to-be-named bridge is a result of a 100 million kroner gift to the city from the philanthropists Realdania, and follows in the footsteps of last year’s much-beloved Cykelslangen and Danish-Icelandic artist Olafur Eliasson’s futuristic-looking Cirkelbroen (the Circle Bridge), which is set to open later this summer. Also expected to open is the perpetually-delayed Inderhavnsbroen (Inner Harbour Bridge), which will connect Nyhavn and Christianshavn.
Plans for the bridge alongside Langebro were first announced in August, with Morten Kabell, the city’s deputy mayor for the environment, saying it would be a major improvement over cyclists’ current options for crossing the Copenhagen Harbour.
See also: Copenhagen cyclists to get another new bridge
“Today when cyclists cross the harbour, they either need to use the vehicle-filled Langebro or deal with the congestion on the bike paths over Knippelsbro. Now cyclists will get yet another cycling bridge, which will also make it possible for them to exchange the car-filled H.C. Andersens Boulevard for Vester Voldgade, which buzzes with life rather than the noise of cars,” Kabell said. Illustration: Team BuroHappold Limited
Some 35,000 cyclists currently cross Langebro daily and the expectation is that around a third of those will opt for the new bridge once it is completed in 2018. The middle section of the new bridge will be able to swing 90 degrees to make way for passing ships.
See also: Copenhagen rides to the top of bicycling world
Copenhagen was recently declared the best city in the world for cyclists, topping its friendly rival Amsterdam in the index put together by influential urban consulting firm Copenhagenize.
The firm pointed specifically to the investments in cycling infrastructure as reason for the Danish capital’s first-place ranking.
“You simply can't keep track of the constant flow of new bicycle urbanism stuff in Copenhagen. High points in modal share increase and a good harvest of bonus points for that, as well as infrastructure and political will pushed Copenhagen into first place. Innovation. Investment. Improvement,” the index stated.