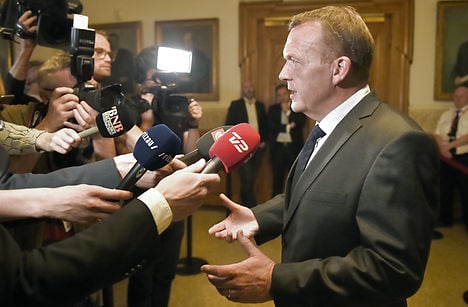 Lars Løkke Rasmussen announced his plans to establish a Venstre-only government on Friday night. Photo: David Leth Williams/Scanpix
Lars Løkke Rasmussen will become Denmark’s next prime minister and reside over a one-party government, he said on Friday night.
“It is my estimation that it will be possible to establish a Venstre government under my leadership that will enjoy support in parliament,” Rasmussen told assembled press on Friday after a week of talks with the Danish People’s Party (DF), Liberal Alliance and the Conservatives failed to form a coalition.
Rasmussen said Venstre would put the finishing touches on a government platform and then inform Queen Margrethe of his plans. With her blessing, he will then introduce the members of his cabinet on Sunday.
Rasmussen was selected to become prime minister despite Venstre finishing in third place with 19.5 percent of the vote, behind Helle Thorning-Schmidt's Social Democrats and the far-right DF, which saw support jump to 21.1 percent from 12.3 percent.
Since last Thursday’s election, he has been in coalition talks with DF, the libertarian-leaning Liberal Alliance and the Conservatives but the distance between the parties on issues like public spending ultimately proved too wide to overcome.
See also: DF considers new role in government
DF — which campaigned on tighter immigration rules, higher pensions for low-income earners and more money for healthcare and the elderly — has given previous conservative governments parliamentary support. But analysts say its new clout poses a dilemma for the party since staying outside government risks disappointing many voters, while assuming government responsibility could also make it less popular in the long run.
With just 34 mandates, the Venstre government will be Denmark’s smallest since 1973. That government, led by Venstre’s Poul Hartling, had just 22 mandates behind it and lasted only 14 months.